Martin Guzzlewit – what the Dickens is that? 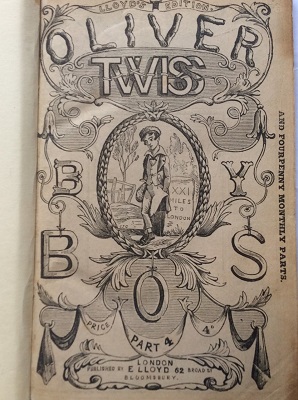 Oliver Twiss, Barnaby Budge, Nickelas Nickelbery, Martin Guzzlewit...no, these are not spelling mistakes but the actual titles of books published in the mid-nineteenth century.

In carrying out research for a new book about publisher and early press baron Edward Lloyd, Professor Rohan McWilliam of Anglia Ruskin University (ARU) has found that many people’s first encounter with Charles Dickens wasn’t through the great novelist’s own work, but through one of the many cheap copies published by Lloyd in the 1840s.

Even while The Pickwick Papers and Oliver Twist were still being serialised by other publishers, Lloyd’s own writers were churning out plagiarisms which used Dickens’ own characters and plots.  And although they were produced quickly to “cash in” on Dickens’ soaring popularity, they were not flimsy works; Oliver Twiss is longer than Dickens’ original.

Professor McWilliam, who specialises in the history of Victorian Britain, said: “These cheap imitations were simply written to cash in on Dickens’ fame.  Dickens was outraged that other authors and publishers were making money from his creations, but he was unable to get a judge to ban them.

“What’s particularly interesting is that many Victorian readers may have first encountered Dickens not through his own work, but through one of these imitations.  There were many titles produced, which indicate that they were incredibly popular.  And in some ways the plagiarisms could be seen as the original form of fan fiction, as they took familiar characters and did different things with them.”

From his publishing house just off Fleet Street, Lloyd was one of the key figures in shaping popular culture of that time.  Lloyd helped create the first mass readership for popular fiction by issuing “penny dreadfuls” aimed at the working class.  Sweeney Todd was introduced for the first time in a Lloyd-published novel.  So was the character of Varney the Vampire, who almost certainly influenced Bram Stoker’s Dracula.

Professor McWilliam continued: “When we think of the 1840s, we think of the publication of major novels such as Jane Eyre and Vanity Fair.  The reality is that many readers were as likely to be consuming shockers issued by Lloyd such as Ada the Betrayed.  The publisher told his illustrators, tasked with knocking out lurid pictures to accompany his publications: ‘There must be blood...much more blood!’”

Lloyd was also the original press baron.  Lloyd's Weekly Newspaper was a Sunday paper aimed at the working class, and went on to become the first newspaper to sell a million copies.  It used a formula of employing lurid true crime and sensation to sell copies, making it a predecessor of the “red top” tabloids.

And he innovated in new technology. Lloyd was responsible for introducing the Hoe rotary press to Britain, which made it easier and cheaper to print large numbers of newspapers.

“Lloyd really should be much better known as he was a key figure in the emergence of newspapers and popular culture in Britain, but his reputation failed to live on following his death in 1890,” added Professor McWilliam. “Although his publications have little literary merit, hopefully our book shows that Lloyd’s overall achievements deserve much greater recognition.”

Edward Lloyd and His World: Popular Fiction, Politics and the Press in Victorian Britain, co-edited by Sarah Louise Lill and Rohan McWilliam, is published by Routledge.