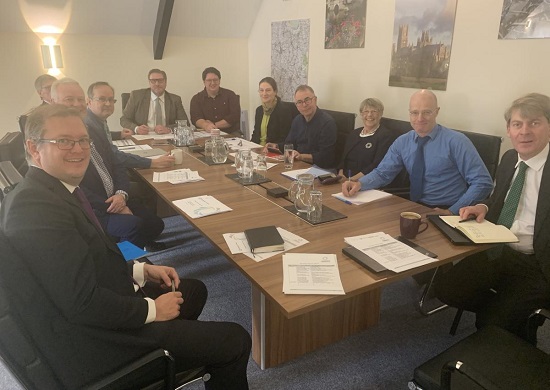 The bus reform task force met for the first time to agree next steps for the ongoing strategic review of Cambridgeshire and Peterborough bus services.

Held in the Ely office of the Metro Mayor, James Palmer, the inaugural meeting of the bus reform task force brought together representatives from across Cambridgeshire and Peterborough along with bus transport experts with knowledge and expertise from this region and further afield.

The group heard first from the Mayor of Cambridgeshire and Peterborough, who expressed the guiding principle of the bus reform:  to improve services for users.  Mayor Palmer said the focus of the group should be to find the best way of doing this and that all options should be considered carefully.

The group agreed their primary purpose was to offer strategic guidance on the bus review programme, known formally as the Strategic Bus Review, announced in January 2019.  The group also agreed to provide feedback, act as representatives for their areas, and advise on major decisions.

The taskforce was introduced to the proposed options for improving the bus network including more involved partnership working between the Combined Authority and bus companies and franchising.

They were informed of proposed ‘quick wins’ for the bus network, including better signage and improved information for bus users.   Key issues to be tackled during the reform were also agreed, including the diversity of the region, subsidies and determining the scale of investment that will be required to improve services.

Members of the taskforce heard from transport experts on bus reform in other regions, including Tees Valley, which is trialling a user-demand style app that will allow passengers to book a bus on their smartphones across rural stretches of the region from this January and the West of England Combined Authority who are piloting ‘clean air’ zones.

To conclude the meeting, the group were advised of ongoing work and key milestones of the bus review, including a survey of bus and non-bus users currently underway until 15th December. The results of the public survey will feed into a draft vision for improving the bus network.

To keep up momentum and action on improving the bus network, the bus taskforce agreed to meet again early in the New Year.