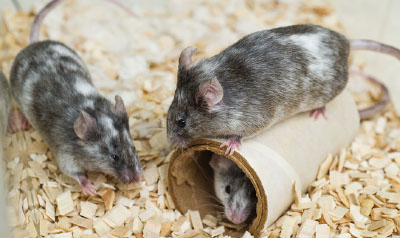 Scientists at EMBL's European Bioinformatics Institute (EMBL-EBI) and the Wellcome Sanger Institute have discovered significant diversity in the genomes of 16 laboratory strains of mouse, potentially impacting future research in genetics, drug development and beyond.

The research, published in the journal Nature Genetics, produced draft genome sequences for 16 of the most widely used mouse strains, revealing, for the first time, notable genetic diversity. Significant areas of the genome where variation was found include regions impacting immunity, pathogen defence and sensory function. These variations also differ widely from the current reference strain, suggesting this discovery has the potential to significantly impact future human disease research.

The lab mouse is a staple of research in understanding health and disease, drug development, vaccines and genetics, and is the most widely used mammalian model organism. Its similarity to the human genome, with 98 per cent of genes comparable to those in humans, has made the mouse genome instrumental in helping researchers understand disease and develop drug treatments.

Researchers use a variety of different mouse strains to study human disease. For example the Non-obese Diabetic (NOD) mouse is used to study type 1 diabetes. Prior to the current study, researchers only had the complete genome for one of these strains. By sequencing 16 of the most commonly used mouse strains, this study discovered hundreds of new forms of genes associated with disease, as well as a previously unknown gene. This is one of the largest known mouse genes to date, and has been associated with brain development.

“We examined the regions of the genome that were most different compared to the single genome that the whole community is using. One of the most striking things we found is that genes important for disease research were the most highly-variable genes. We looked in detail at a few of these regions and found completely different gene structures compared to the reference strain.

“If you’re using mice for your experiments you need to be aware of the diversity that’s present in those types of genes. What we’ve generated is a resource for the community.”

“Mice have played a critical role in defining the genetics of mammalian development and for modelling human disease. We have known for some time that there are differences between mouse strains in phenotypes such as response to viruses and pathogens. These genomes allow us to understand these differences, which could have profound implications for human disease research.”

These findings have the potential to impact the future of genetics research, drug development and the way in which research is carried out. The resource has now been made available to the wider scientific community. The 16 genomes have been incorporated into Ensembl, where they can be freely accessed and analysed.