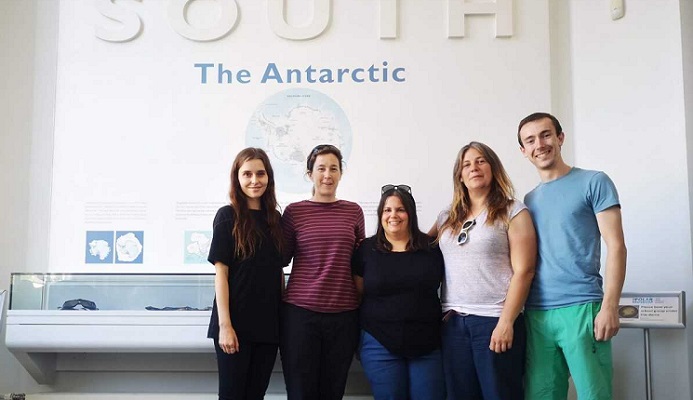 The United Kingdom Antarctic Heritage Trust (UKAHT) is delighted to reveal the new Port Lockroy team who will live and work on the remote island of Port Lockroy off the Antarctic Peninsula during the next Austral Antarctic summer (November 2019 – March 2020).

Working in sub-zero temperatures, with no mains electricity or running water, the team, which includes two Britons, an Irishman, a Scot and a Finn, will run the world’s most southerly public post office, manage Port Lockroy’s living museum and monitor the resident gentoo penguin colony.

It will take this year’s intrepid, Antarctic adventurers more than two weeks by plane and boat to travel the 11,000 miles to their temporary island home, which is around the size of a football pitch.

Once there, they will welcome up to 18,000 visitors to Port Lockroy throughout the season and give them an insight into life on a scientific base in Antarctica in the 1950s and 60s. These visiting explorers can buy souvenirs in the gift shop and send postcards from one of the most famous public post offices in the world. Last year’s Port Lockroy team hand-cancelled more than50,000stamps on postcards destined for over 100 countries.

For those dedicated enough to make the trip, the island offers some of the most dramatic mountain and glacier scenery on the west side of the Antarctic Peninsula. Located at the southernmost tip of the globe and teaming with wildlife, the region experiences up to 24 hours of daylight in the summer.

Port Lockroy has been home to explorers, whalers, scientists and sailors who have made vital contributions to Antarctic history. This year’s UKAHT team will make an important contribution to a long-term scientific study of the resident colony of gentoo penguins to better understand the impact of environment change on the site.

This year the core Port Lockroy team will also support the UKAHT Conservation team; highly skilled heritage professionals bought together by UKAHT to carry out a wide variety of tasks including the laser scanning of buildings and restoration work. The team consists of individuals from the Scott Polar Research Institute, British Antarctic Survey and the New Zealand Antarctic Heritage Trust.

·       Lucy Dorman. Base Leader. From Oxford, now living in Cambridge, UK,Lucy is returning to Port Lockroy for her second season having spent the last twelve months as Antarctic Operations Manager for UKAHT.

·       Vicky Inglis. Originally from Aberdeen, now living in Bedfordshire, Vicky has visited Arctic Norway, Finnish Lapland and Greenland but this will be her first time in Antarctica. Vicky will lead wildlife monitoring during the season.

·       Kit Adams. From Northern Ireland, Kit has had three visits to the Arctic but this is his first trip to the Antarctic. Kit will take on the role of Postmaster at Port Lockroy.

·      Lauren Elliott. Born and raised in Portsmouth, UK, this will be Lauren’s first polar experience and she’s excited and eager to play her part in this years’ team, whilst taking responsibility for the running of the shop.

·       Heidi Ahvenainen. Originally from Finland, this will be Heidi’s second time in Antarctica and she will join the team for the second half of the season to provide additional support.

Camilla Nichol, Chief Executive, UKAHT commented: “The team’s combined experience, from mountaineering to public engagement, will stand them in good stead to live and work in this unique and challenging environment.

“We are delighted to welcome Lucy and Heidi back for their second seasons at Port Lockroy. Their previous experience will serve them and the team well, particularly during the initial set-up phase on arrival.

“The whole team has undergone extensive training at our Cambridge headquarters, to prepare them for a variety of situations that could arise when living in one of the most remote places on Earth.”

The group will arrive at Port Lockroy in November and will send regular blog reports back to the Cambridge-based UKAHT team, documenting their experiences and giving an insight into what life is like in this most distant corner of the world.