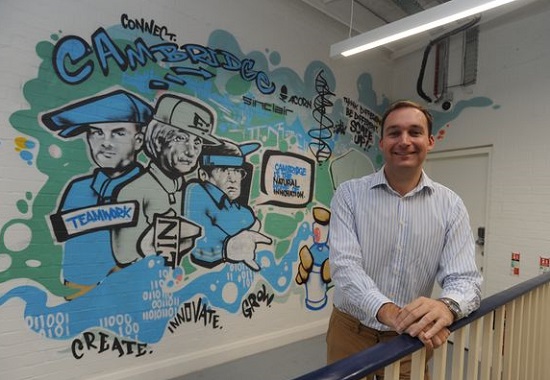 After its successful launch in May 2016, Barclays is investing in the Cambridge business community by expanding its Eagle Lab based at Chesterton Road, Cambridge.

The extensive refurbishment work to the ground floor of the building, which completed last week, will enable the Eagle Lab to offer a further 50 new members of high growth businesses desk space in private offices, bringing total capacity to 136. A new meeting room has also been created along with a restroom and shower facilities for the members.

The location of Barclays first Eagle Lab was chosen on Cambridge’s history of developing an outstanding record of business success, based on a relationship between a world-leading University and one of Europe’s top technology clusters. The Eagle Lab was specifically designed to support fast growing businesses and entrepreneurs and follows on from Barclays’ launch of its High Growth and Entrepreneurs’ proposition, supporting UK scale-ups and their founders, in direct response to Britain’s scale up gap.

The Eagle Lab has already seen a number of success stories in the time it has been open such as Prowler, FiveAi and Cambridge Coding Academy, who have rapidly grown and now moved on to larger office space.

In just fifteen months, member companies have also supported the wider UK economy by creating 53 new jobs and raised £46.5m in funding collectively over the past 12 months, including Satavia, who has recently won funding of £1.1m.

The free facilities at the Eagle Lab have proved popular with members, including the use of the auditorium for meetings, superfast wifi (100MB upload and download), tea and coffee, printing and the ability to collaborate with the member community.  The installation of a 1GB bandwidth, which will be one of the biggest in Cambridge, will be available before the end of the year.

The Eagle Lab has also run a successful series of seminars with wide-ranging topics with over a 1,000 people attending since it opened.  A new third series is planned between 1st September and 3rd November, including 15 external events and Judge Business School seminars that are all available to the wider Ecosystem. The series will include a presentation from Joseph Valente on 12th September, a winner from the BBC One show ‘The Apprentice’, and specialist speakers from IBM and Thomson Reuters.

Benjamin Storey, Head of Eagle Labs Cambridge at Barclays (pictured), said:” We have had a fantastic response from the Cambridge community since we launched in May 2016. We set out to help scale local Cambridge businesses and we have so far been successful in reaching that challenge.

"Watching our member businesses grow, such as Wavelength Law who joined us as two founders and in 15 months now occupy one of our bigger ten person offices, has been a tangible reward for the assistance we have helped to provide. The demand to be involved with Eagle Labs so greatly exceeded our capacity, the only thing we could do was make it bigger to provide us with the opportunity to assist more local Cambridge businesses to grow. Therefore, I am ecstatic to see Barclays have invested in the Eagle Lab to make it bigger.”

Barclays Bank in Cambridge provides support to our customers, for a range of diverse needs. From opening your first bank account at 11, to multi national corporations, we have the knowledge and passion to help you grow!