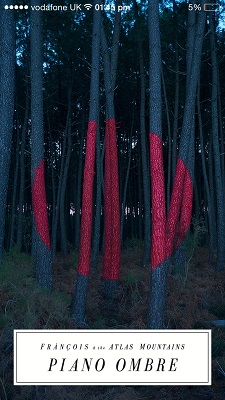 Anglia Ruskin University experts are working on a release that could change how we buy music in the future.

Anglo-French pop group François and the Atlas Mountains are taking part in a pioneering research project as their new album, Piano Ombre, is released on CD, vinyl LP, digital download – and as an ‘album app’ for iOS devices.

The innovative app, which features high-quality versions of the album tracks together with 24 exclusive bonus tracks, artwork, song lyrics and producer credits, forms the basis of a project examining the app as a future standard album release format, perhaps even the future of the album itself.

Supported by Nesta’s Digital R&D Fund for the Arts, the research is being carried out by Anglia Ruskin University’s Cultures of the Digital Economy (CoDE) research institute (www.anglia.ac.uk/code), along with music and content agency Script (www.script.fm) and app developers Agency Mobile (www.agencymobile.co.uk).

CoDE is using the Piano Ombre app – the first chart-eligible album app in the world – as a test case for music consumers, artists and record companies, examining the user experience, the creative potential afforded to the artist and the overall economics of releasing an album as an app.

While the cost of app development is potentially prohibitive for smaller artists and labels, this project hopes to establish a framework that can be used in future to make releasing album apps affordable for all music artists.

Dr Rob Toulson, Director of the CoDE Research Institute at Anglia Ruskin, said: “There has been a lot of buzz around the experimental album apps released so far by a handful of artists such as Björk and Lady Gaga, but until now no one has properly looked at the costs and benefits for consumers, artists and record companies.

“We want to find out how receptive the audience is to consuming music in this way.  We want to see what artists can do with the format when given the opportunity.

“Most importantly, we want to understand the obstacles – from technical issues, to the cost of development, to a lack of awareness – that may need to be overcome if this format is to succeed.  Although the album app has many potential strengths, questions surrounding the handling of royalties, chart eligibility and distribution remain, and these must be answered if the format is to be embraced more widely.

“Our findings will have big implications for artists and the music industry and may give an indication as to how we will all be consuming recorded music in the near future.”

Script founder Jonathan Shakhovskoy said: “The app format has the potential to benefit everyone with a stake in recorded music.  For consumers, it can restore the album experience, delivering a suite of songs as the artist intended, supported by images, lyrics and liner notes.  These are things completely absent from digital download platforms and streaming services like Spotify.

“This is about more than people listening to music on headphones with an iPhone or iPod. It’s about delivering audio and video to smartphones and tablets that are connected to wireless speakers and, soon, to app-enabled TVs. That’s where this format will really come to life.”

Brimming with creativity and a charming, handmade aesthetic, the app expands on the physical-format album artwork with animation created by François Marry.

While listening to each song on the album itself, users can browse through sleeve notes, lyrics (in French and English) and chords.  The app does not just house static content, however.  Users can access constantly updated information such as the tour dates (with the option to buy tickets), as well as the band’s photo blog and François’s sketches and journal.

By taking a picture using the ‘Sun Tracker’ feature and then sharing it via Facebook, Twitter, Tumblr or email, users can unlock and listen to one of the 24 exclusive bonus tracks for an hour at a time.

The app is available now via the Apple App Store. Users can buy the Premium app with the whole album included for £7.99. The Lite version, costing £1.99, has all the same features without the album tracks, which are available to purchase individually.

About François and the Atlas Mountains: www.francoisandtheatlasmountains.com

About Nesta’s Digital R&D Fund for the Arts: www.nesta.org.uk/project/digital-rd-fund-arts﻿