Next-generation robot revealed to the world for the first time 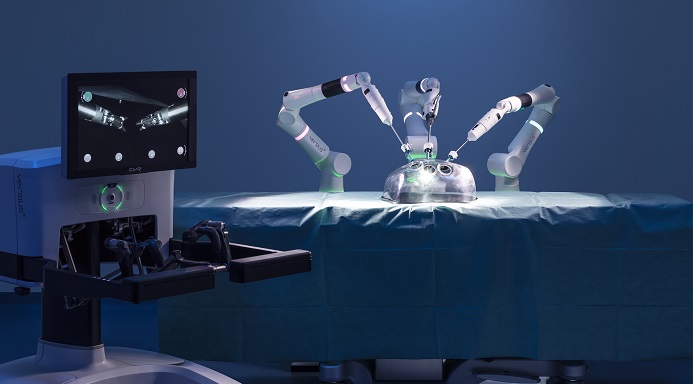 Designed to meet the complex requirements of minimal access surgery, Versius has been created and built by the CMR Surgical team in Cambridge, United Kingdom.

Versius resets expectations of robotic surgery by providing a versatile system that is portable, transportable and affordable. This is made possible because of its small form factor, modular design and individually cart-mounted arms. Versius is easy to move between operating rooms and even hospitals, quick to set up and gives the surgical team easy access to the patient at all times.

Biomimicking the human arm, Versius allows surgeons the freedom of port placement, but with the benefits of small fully-wristed instruments. With 3D HD vision, easy-to adopt instrument control and a choice of ergonomic working positions, it is hoped the new open surgeon console will reduce stress and fatigue, offering the potential to extend the careers of surgeons.

With Versius, CMR Surgical wants to remove barriers that currently exist to robotic surgery. For patients and healthcare providers alike, the benefits of minimal access surgery are compelling. The promise of reduced trauma, faster recovery and improved clinical outcomes has been the driving force behind the development of surgical robotics for decades. However, despite these benefits, robotic surgery is not yet performing the majority of available surgical procedures due to current constraints, leaving millions of patients worldwide still undergoing open surgery.

Martin Frost, Chief Executive Officer at CMR Surgical, said: “We believe Versius represents a paradigm shift in surgery. The ground-breaking design, coupled with genuine affordability, means that patients everywhere have the potential to benefit from the advantages of minimal access surgery. Versius is a great example of British innovation and its launch represents a pivotal moment in the next chapter of surgery and patient care.”

CMR Surgical has more than doubled in size in twelve months. In only four years since incorporation, the company now employs over 220 people and recently announced a record breaking private fundraise of $100M. The company is currently undergoing validation studies for regulatory approval processes in Europe. The robotic system will be used in hospitals in the UK and continental Europe in the next year, with wider international expansion shortly afterwards.

The unveiling has been accompanied by the release of never-before-seen images and a film that demonstrate the innovative design of the robot.