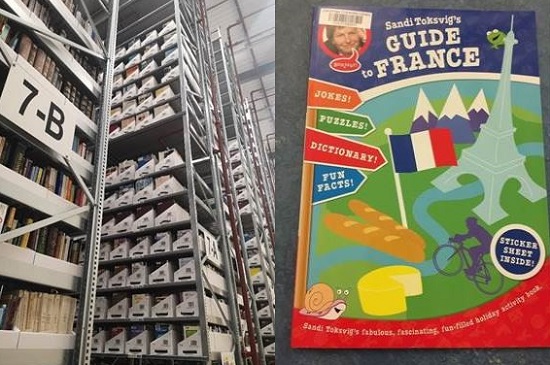 A children’s book by Girton College graduate Sandi Toksvig is the one millionth book to take its place in Cambridge University Library’s Ely storage facility, 18 months after ‘The Hitchhiker’s Guide to the Galaxy’ (written by fellow Cambridge alumnus Douglas Adams) became the first book to be placed in the facility.

Since opening in May 2018, the Library Storage Facility (LSF) has proved critical in the day-to-day operations of Cambridge University Libraries, housing more than a million books and journals, as well as copies of the Yellow Pages and telephone directories.

Built to store more than four million items, the self-regulating facility has a capacity equal to 18 Olympic-sized swimming pools with shelving that measures 65 miles – the distance from Cambridge to London. The facility is now 25 per cent full.

Toksvig’s Guide to France, a children’s language book, now joins a wide variety of material already transported to Ely, from the Harry Potter novels, to US History for Dummies, to the Puffin Book of Nursery Rhymes.

An alumnus of Girton College, which celebrated its 150th anniversary in 2019, Toksvig is also featured in The Rising Tide: Women at Cambridge exhibition currently open (free entry) at the University Library until March 21.

“It has been a fantastic project to be involved in and is very different from anything the Library has done before,” said Robin James, Head of Collections Logistics and Services. “To have transferred over a million items in such a short period of time has been a great team achievement and I’m delighted to continue managing the LSF and Collection Logistics in this new environment.”

The £17m LSF was built to house low-usage material and currently receives between 7,000 – 10,000 items for storage each week.  Since 1710, the University Library has been one of six ‘legal deposit’ libraries entitled to receive material published in the UK and Ireland. In the past, this material has been shelved around the Library, including its vast 17-storey tower and, despite electronic legal deposit being introduced in 2013, the library has been operating at near capacity for some time.

While most of the items in the LSF are legal deposit titles, Robin notes that another essential element of the project was to help relocate collections from Faculty and Department libraries with a shortage of space, and support University building projects that required the downsizing of a library.

The Ely store is currently receiving, on average, 58 requests a week for LSF items from readers - and requests are monitored to deem whether an item should be labelled as ‘low-usage’ or returned to general circulation. The LSF has a team of 30 working both in Ely and at the West Road site, helping to solve the enormous jigsaw puzzle of moving the vast amount of material selected to be housed at the LSF.

With valuable space in the library stacks slowly becoming available, the aim is to make the collections housed at the Library more accessible and current while allowing academic and other significant collections the space to grow. The project also plans to remove temporary cases that have been added over the years to restore the architectural integrity and aesthetics of the 1934 Giles Gilbert Scott building.

“In a Legal Deposit collection as large and nationally significant as Cambridge University’s, some of the collection will inevitably be considered lower use today,” added James. “By proactively managing collections and moving this material to a dedicated off-site store, where full access can still be granted, the Library is able to respace those collections in greater use, increasing access and currency, and to repurpose space across libraries in Cambridge to directly support teaching and learning.”

Depending on the scale of ingest, the storage facility could be 50 per cent full in around 30 months’ time. The project ensures that the library’s world-class collections are kept in optimum conditions and can continue to be used to support the world-leading teaching and research of the University and beyond.

Dr Jessica Gardner, Cambridge University Librarian, said: “For more than 600 years, Cambridge University Library has been a cathedral of knowledge, collecting and preserving one of the world’s most important and priceless collections of books, maps and manuscripts – from Newton’s personal copy of Principia Mathematica to Darwin’s papers on evolution.

“Now, to make sure we can continue to preserve what is so precious – and meet our ambitions to be a truly global, 21st century collection – we have to make the most effective use of space possible.”

1. For more than 600 years, the University Library has been central to the support of teaching and research at Cambridge. More than eight million books and periodicals, one million maps and many thousands of manuscripts occupy more than 125 miles of shelving, which extends by a further two miles every year. The Library collections vary hugely in age and content. Chinese oracle bones from the second millennium BC can be found alongside the latest online scientific journals; illuminated decorations in medieval manuscripts can be studied as originals and as digitised images delivered over the internet.

2. Highlights of the University Library’s special collections include the papers of Isaac Newton, an archive of Charles Darwin’s correspondence, archives of the Royal Greenwich Observatory, the library of the Royal Commonwealth Society and the 5th century Codex Bezae. The latter is one of the most important New Testament manuscripts, containing many unique forms of the text, including a saying attributed to Jesus found in no other sources. The collections also include objects currently on display in The Rising Tide: Women at Cambridge exhibition.

3. As a Legal Deposit library since 1710, the Library is entitled to acquire a copy of each book and journal published in the UK and Ireland, which results in a rich and diverse collection providing future scholars with the raw materials for research in many fields. With two million of its volumes on open shelves, readers have the largest collection in Europe immediately available to them.