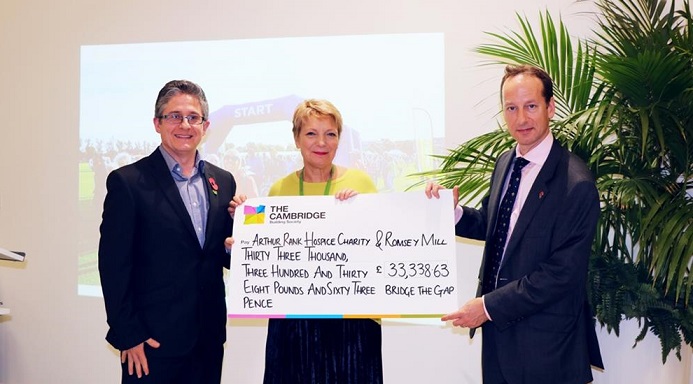 A special ‘Thank You’ get together was held this week to celebrate everything that has been achieved with the City’s annual Bridge the Gap Charity Walk - sponsored by Cambridge Building Society - since it first began in 2001. Find out how much was raised at the event in September...

A cheque for £33,338.63 was presented to the benefitng charities, Romsey Mill and Arthur Rank Hospice – which will be split evenly between the two - taking the impressive grand total over the last 16 years to over £473,000.

Forty people including the walk’s sponsors, committee members, participants and event partners, attended the evening - held in the Bistro of Arthur Rank Hospice’s new home - to celebrate the walk which took place earlier this year on Sunday 10 September. Guests were treated to glasses of bubbly and delicious nibbles courtesy of the Hospice’s catering team and kindly funded by the event’s main sponsors Cambridge Building Society. Some present on the evening took part on this year’s walk having received support from Romsey Mill; others have taken part in the walk for many years - including a number with strong personal connections to the Arthur Rank Hospice after it previously cared for family members of friends; and two guests were reunited having met and completed the walk with each other two years before! All reminisced about how the event has grown and talked about their favourite parts of this year’s 5 mile walk around Cambridge’s historical College buildings and beautiful gardens.

A photo show - interspersing highlights of this year’s picturesque route with some of the drawings made by Urban Sketchers during the event, provided a colourful backdrop to the chatter, before Dr Lynn Morgan CEO from Arthur Rank Hospice welcomed everyone and explained why Bridge the Gap is such an important event in both the City and benefitting charities’ calendars.

She comments: “This is a fantastic event, which greatly benefits not only the Charities, but also the people of Cambridge and its visitors by creating a wonderful opportunity to invite them into what are often hidden but delightful corners of our beautiful City. It is only through the cooperation of a great number of organisations, including the Cambridge University, the individual Colleges and some of Cambridge’s most influential businesses that it is possible and we continue to feel both extremely grateful and honoured to be a key part of it each year.”

Representatives from the event’s sponsors were in attendance, including the Rotary Club of Cambridge, TTP and Peter Burrows, Finance Director from Cambridge Building Society who also spoke. He noted that the event has now been going nearly as long as Strictly Come Dancing and continued the comparison with the popular dance show by noting that feedback from the walk is always much more complimentary than that offered by some of the judges on the show and adding how wonderful it is that such a generous amount of money will help care for those Romsey Mill and Arthur Rank Hospice support, throughout the county.

He adds: "We are delighted to have played such an active role in another successful Bridge the Gap event which has raised an incredible amount for two very important local charities.  The event is enjoyed by so many of our staff, with a record number of them and their families taking part this year, so we’re pleased to provide our support for the event in 2018 in what will be our tenth year of being headline sponsor."

Further VIPs included Hugh Myles who was representing the Cambridge Society of Tour Guides, who had been on-hand with interesting facts about the College grounds throughout the walk; Steve Swann, representing members from the Army Cadet Force who had helped with marshalling on the route; Terri of Ten Sing, whom along with the Waterbeach Brass Band and local solo artists, provided musical entertainment on the route; and Neil Whiteside from Cambridge 105 which broadcast live from Parker’s Piece on the day.

Neil Perry, CEO from Romsey Mill, concludes: “It was lovely to be able to say “Thank you” in person some of the amazing people who help to make this the unique and successful event that it is. Bridge the Gap really does bring the Cambridge community together. It’s fantastic to see local businesses and community groups in partnership with people who either give their time to volunteer on the day or pay to take part in the fantastic walk through Cambridge University’s Colleges. And all of it takes place to benefit two local charities who provide valuable help to people when they most need care and support. We look forward to next year’s Bridge the Gap walk on 9th September 2018, and invite everyone to come and join us! A great time is guaranteed!”