Oxford-Cambridge Arc set to create new tech and innovation clusters that will compete on a global scale, says Savills 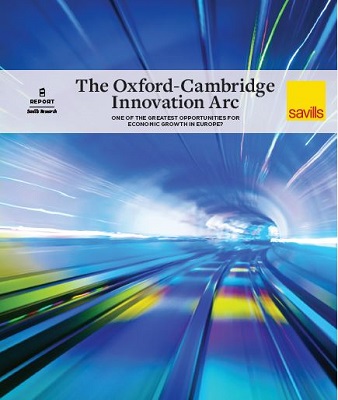 The Oxford-Cambridge Arc has the potential to create up to 1.1 million new jobs by 2050 if the required new infrastructure is delivered, according to new research from Savills. An additional 9.6 million sq ft (891,869 sq m) of office and R&D floorspace, plus the delivery of 69 million sq ft (6.410 million sq m) of warehouse accommodation will be needed to facilitate this growth.

At present, Oxford and Cambridge remain the driving force, however new infrastructure is likely to draw significant investment to both Bedford and Milton Keynes alleviating pressure on the two historic ends of the arc. Already home to several clusters of world leading industries, there is significant potential to realise further synergies by enhancing the connectivity of the region.

This growth is likely to be driven by sectors that have attracted considerable investment in the past five years, most notably pharmaceutical, cybersecurity, automotive and biotechnology. Savills notes, that whilst Oxford and Cambridge continue to attract the largest share of private equity and venture capital investment, the delivery of floorspace in locations such as Bedford and Milton Keynes means there should be a wider distribution in the future.

In particular, there will be a new focus for innovation and growth in Milton Keynes, which will be supported by the creation of a new university due to open in 2023. This will see 5,000 students focusing on science, technology and engineering. Joining the 10 existing universities within the arc, greater connectivity will encourage more collaboration between the institutions, strengthening the cluster’s ability to commercialise ideas.

Encouragingly, Savills research shows that the region has already received significant levels of funding, rising from £10.2 billion in 2018 to £27.4 billion, a 170% increase to the end of September 2019. In terms of venture capital, this has risen from £861 million in 2018 to £1,076 million in the same time period, a 25% growth rate despite high levels of political uncertainty in the UK.

Steve Lang, director in the Savills research team, comments: “An increase in overall investment into the tech and life science sectors within the arc is a strong indication of potential future real estate requirements. What’s clear is that there is a need for choice in terms of scale, price points and location when it comes to commercial space in order to facilitate this growth within the region and to ensure the UK remains attractive to global businesses.”

Ultimately, the  success of the arc will be determined by the growth of competing locations across the globe. Savills believes it is key to deliver the most appropriate office and R&D space within specific sectors to retain and expand them within the arc.

A review of the Global Innovation Index 2019, compiled by Cornell University, INSEAD and the World Intellectual Property Organisation (WIPO), shows the relative strengths of 129 economies of all scales. The best science and technology clusters, determined by using scientific publications and patent filings under WIPO and data from the Patent Co-operation Treaty (PCT) place Oxford and Cambridge at 71st and 58th respectively. Savills notes that neither city has moved up the rankings in recent years due to regional constraints, whereas almost all Chinese clusters have continued to grow.

Steve Lang adds: “It is clear for the life science cluster in the arc region to compete internationally there needs to be greater collaboration between major centres. From an affordability perspective, prime office rents in Cambridge and Oxford are considerably lower than its American counterparts in Boston for instance. Therefore, there needs to be a conscious decision from developers and investors to price office and laboratory space appropriately if the cluster is to continue to expand and thrive whilst allowing for sensible rental growth.”

The Oxford – Cambridge Arc: potential for 1 million homes - but there are challenges to overcome, says Savills

The Oxford-Cambridge Arc could deliver 1 million new homes and 1.1million new jobs by 2050 if the new infrastructure along the corridor is delivered.

Improving connectivity and infrastructure could act as a catalyst for future growth, according to the new report by real estate advisor Savills, however there are challenges to delivering on the potential.

The National Infrastructure Commission found that the main risk to the success of the area is ‘lack of sufficient and suitable housing’ and without a joined-up plan for housing, jobs and infrastructure across the corridor the area will be left behind by its UK competitors.

In the Oxford-Cambridge Arc, Savills considers some of the challenges to successful delivery of the strategy.

If the government’s ambition for 1 million new homes across the arc by 2050 is to be reached a coordinated response from local authorities is key.  The area defined in the report’s analysis covers 26 district and unitary authorities, 4 county councils, and 1 combined authority -  Green Belt constraints in certain places along the arc present an additional challenge.

Garth Hanlon, Savills head of planning in Cambridge, says: “Re-examining the role of the Green Belt, particularly around Cambridge and the southern fringe of the arc will inevitably be part of the wider spatial planning.  What’s needed is a coordinated approach across neighbouring districts.  A key challenge for the area will be combining the localism embedded in the National Planning Policy Framework with a strategic, joined up vision for the whole corridor.”

Delivery needs to rise by 13,000 homes annually against what is currently being planned for – an additional 47% of the current delivery rate - and would mean building at a rate of 3.1% of the corridor’s 2018 stock every year – a level not currently being achieved anywhere in England.

The main opportunity unlocked by new infrastructure and the pattern of future growth will be concentrated in the centre of the arc, around Milton Keynes and Bedford, according to the report.  The area benefits from a relative lack of constraints and existing infrastructure crossing it from London and Birmingham.

“Greatest potential for delivery is the middle of the arc, where land is less constrained, and the intersections of old infrastructure will have the greatest impact on connectivity”  says, Richard Janes, Savills head of development in Cambridge.  “Areas such as Milton Keynes and Bedford already have the highest forecast household growth – there are also the more affordable markets with land values that are more able to support the diversity of mix and tenure needed to enable the high rates of absorption needed to build homes at 3% of existing stock.”

The report also highlights a significant requirement for more land. The challenge is that to meet the ambition of delivering 1 million homes by 2050, land with capacity for 680,000 homes – equivalent to over 23,000 hectares -  still needs to be identified.  And while the four new garden villages within the arc will support delivery, these are not the silver bullet to increasing delivery to the level needed.

The rate at which houses can be sold  - market absorption - is another challenge.  Innovative approaches will be needed as open market capacity to absorb new homes will be limited.  To improve absorption rates developers will need to provide a range of housing type tenures.

The problem is particularly acute in both Oxford and Cambridge  where the proportion of people able to access home ownership is so limited the private rented sector now accounts for over 30% of all households (compared to 18% across the arc as a whole).  One solution suggested in the report is for city local authorities to continue to work with more affordable surrounding areas to accommodate their overspill of need.  A second solution may be for more schemes to deliver homes for specific needs and across a range of tenures – such as the partnership between L&G and Oxford University providing discounted homes for university staff on university land.

Emily Williams, Savills research analyst, says:  “Building new homes is an important step towards alleviating affordability constraints, which hamper economic growth by pricing out workers – and ultimately reduce the attractiveness of an area for occupiers if they believe they will struggle to recruit.”

Savills is a global real estate services provider listed on the London Stock Exchange. We have an international network of over 650 offices and associates and circa 37,000 staff throughout the Americas, Europe, Asia Pacific, Africa and the Middle East, offering a broad range of specialist advisory, management and services to clients all over the world. www.savills.co.uk or www.savills.com