Pelé, Banks and Kluivert merchandise up for grabs 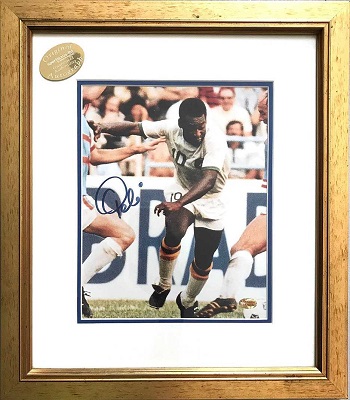 World Cup football is in full flow and East Anglia’s Children’s Hospices (EACH) is hoping to score a big fundraising boost by auctioning merchandise signed by Pelé, Gordon Banks and Patrick Kluivert.

EACH has a photo of Brazil’s and arguably the world’s greatest ever player wearing his famous number 10 jersey, signed by the man himself. Pelé was named FIFA co-Player of the Century in 1999 and remains the only footballer to win three World Cups, in 1958, ’62 and ’70. He is now a global ambassador for football and a range of humanitarian causes.

Among teams beaten by Pelé’s Brazil in 1970 were England. It was a classic encounter in which Gordon Banks pulled off a stunning save from a perfect Pelé header - and EACH also has a photo of that moment, signed by Banks, available to bid on.

In addition, the charity has a yellow England goalkeeper shirt signed by Banks, who spent most of his club career with Leicester City and Stoke City.

The fourth and final item EACH has on offer is a Barcelona shirt signed by Patrick Kluivert. Kluivert is a former Dutch player who scored 123 goals in 259 appearances for the Catalan giants. He also had a spell in the Premier League with Newcastle United.

Specialist auction company Sellebrity is supporting EACH by hosting the auctions on its website at www.sellebrity.org.uk/live-auctions.

Money raised will help EACH continue caring for hundreds of children with life-threatening conditions across the region and supporting their families. For more information visit www.each.org.uk.