Local photographer’s image makes top 10 from around the world 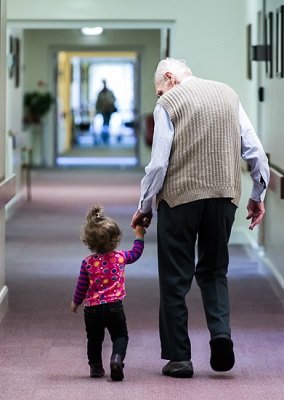 A photo taken by local professional photographer Alan Bennett, of Media Imaging Solutions, has been selected as one of the top 10 images in a global competition.

The international learning company Pearson, creative agency Mother London and design partner Together invited photographers around the world to submit images that captured the essence and emotion of education and learning.

Among the over 500 photographs submitted was one from Alan, who is based in St Ives, Cambridgeshire.

The judges, including the renowned British photographer Rankin, had no hesitation in selecting Alan’s photograph (above), which has won him a prize of $500 and also the potential to continue to work on paid projects for Pearson in the future. It features a resident in a retirement home encouraging his great granddaughter as she tentatively walks down a corridor.

Alan, who also co-ordinates the A14 informal networking group in St Ives, was on an assignment at the Park Lodge Retirement Home in the town of March when he saw the photo opportunity.

“I just saw the gentleman and the little girl walking down the corridor and I was inspired by their responses to one another to take a photograph,” Alan said. “When I contacted Pearson sometime later about commercial work they informed me about the competition and I knew just the photo that I would send them.

“I am so proud to have been selected by the judges, particularly by someone with the reputation of Rankin and to find my work appreciated in this way, along with photographers from around the world.”

Rebecca Sinclair, the Pearson Vice-President Global Brand Architect, said: “The judges selected images that we believed best captured the magic of learning in its many forms. The top 10 images were selected because they pulled on the heart strings and left a lasting impression as well as being vibrant, colourful and optimistic.”

Alan has more than 30 year’s photographic experience and is a member of the National Photographic Society with which he also holds his licentiate LNPS qualification, and member of the Cambridge Network & Cambridgeshire Chamber of Commerce.

He has won a number of prestigious awards before including The Australian Nikon/Panorama Photographer of the Year; plus Gold and Silver in the AIPP Australian Professional Photography Awards when he was living in Australia; and he was the 2010 and 2011 winner of the Norwich Heritage Economic and Regeneration Trust photography competition.