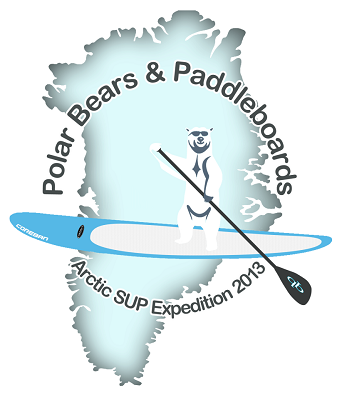 'Polar Bears and Paddleboards' is a unique project which combines an expedition to undertake the world's first stand-up paddleboarding journey in Arctic waters with a large charitable focus, sports and 'active life' development and connects with the 'Schools Explorer' education project developed by Justin Miles.

In August 2013, a team of ten paddlers will paddle for over 100 kilometers to reach the face of one of the world's largest and most impressive glaciers, the Heleim Glacier in Greenland.

Against a stunning backdrop of icebergs and with Greenlands captivating but rugged coastline in the distance the team will have to navigate through unpredictable waters and dodge ice flows as well as keeping an eye open for marauding polar bears when they camp on the coast at night.

The expedition has grabbed the attention of a world wide audience with 'active lifestyle' magazines across the globe running the story as well as UK based newspapers, magazines, TV news and radio shows. Justin Miles commented 'It's quite an odd experience to be appearing on radio and TV  shows in places like South Africa, Australia and the US from the comfort of my living room couch!"

'Polar Bears and Paddleboards' has also grabbed the attention of well known adventurer, TV personality and leader of the scout movement Bear Grylls. Bear has a keen interest in paddleboarding and has been working with a company to develop his own branded boards which the team will be using. The 'Polar bears and Paddleboards' expedition will be the first time that the boards will be seen in public.

The team are working with cancer charity 'Momentum' and last weekend members of the team were involved with organising the first ever paddleboard marathon on London's River Thames which raised over £30,000 for the charity.

Throughout 2013 the team will be hosting a variety of paddleboarding events at locations around the UK including London, the South Coast and Cambridgeshire to introduce people to this new and rapidly growing sport and to raise funds for their two charities, Momentum and the 'Canals and Rivers Trust' which works to keep Britains inland waterways clean and accessible.

The whole project is being professionally filmed and will be used to create a documentary for mainstream television as well as film festivals. There will also be a version available with educational content for the 'Schools Explorer' programme which is lead by Justin Miles and delivered by TT Education.

The film makers have recently launched a video introducing the project with an introductory message from Bear Grylls which you can see here. (the music really does make it quite dramatic, so turn up the volume!)

Cambridge based technology company 'Voyage Manager' are supporting the expedition, and all of Justin's projects, by providing tracking technology so that people, schools in particular can follow the progress of the expedition through a website. The Voyage Manager system, designed and developed to assist companies who move personnel globally, will broadcast the teams location, their travelling speed and will even prompt pre-set social media and email updates as the team reach certain destinations.