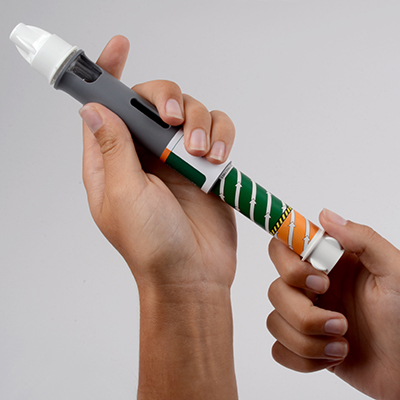 An emerging global epidemic of diabetes is placing a huge burden on healthcare services. An estimated 347 million people worldwide suffer from the disease – including 26 million Americans and more than three million people in the UK. The World Health Organization predicts that, by 2030, diabetes will be the seventh leading cause of death.

Product design and development firm Cambridge Consultants is committed to improving diabetes treatment through the use of innovative technology. The latest example is its involvement in the development of AstraZeneca’s BYDUREON® Pen (exenatide extended-release for injectable suspension) 2 mg – which received US Food and Drug Administration (FDA) approval in February.

In the US market, BYDUREON is the first once-weekly medicine as an adjunct to diet and exercise to improve glycaemic control in adults with type 2 diabetes. The BYDUREON Pen is a pre-filled, single-use pen injector – eliminating the need for the patient to transfer the medication between a vial and syringe during the self-injection process. The exenatide microspheres and diluent are housed in separate chambers within the pen device and only mixed at the time of injection.

Cambridge Consultants used its industrial design and human factors expertise in developing the usability of the BYDUREON Pen. The design guides the patient to the right place to grip the pen – and leads them to naturally hold the device at the correct angle that enables the drug to be mixed properly before injection. The design includes ‘windows’ which show the mixing process inside the pen injector – to focus the user’s attention on this key element of the process.

“Our objective was to make the whole procedure as simple as possible, eliminating the need for the patient to transfer the medication between a vial and syringe during the self-injection process,” said Andy Pidgeon, head of the industrial design and human factors group at Cambridge Consultants. “We carried out extensive usability testing to ensure both patients and healthcare professionals were able to successfully use the BYDUREON Pen.”