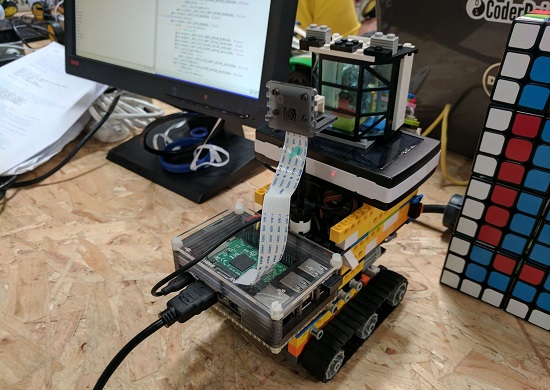 His Royal Highness The Duke of Kent last week (Thursday) presented the UK’s top engineering innovation prize – the Royal Academy of Engineering MacRobert Award – to the team of Cambridge engineers behind Raspberry Pi, the small but mighty microcomputer that has revolutionised control systems and redefined how people engage with coding.

Known for spotting the 'next big thing’, the annual MacRobert Award is presented to the engineers behind the UK engineering profession's most exciting innovation. The winners receive both a gold medal and a £50,000 prize at the Academy Awards Dinner, hosted this year at the Landmark London Hotel.

The Raspberry Pi team was up against another Cambridge-based finalist, cyber security machine learning experts Darktrace, and London-based surface guided radiotherapy pioneers Vision RT for the coveted award. Its tiny low-cost micro PC can be used as the control centre of almost anything, from video games to robots, multi-room sound systems, pet feeders, or scientific experiments. The ‘Pi’ has inspired a new generation of makers and brought computer programming into classrooms in a fun and engaging way.

Originally conceived as a way to boost computer science applications to the University of Cambridge, Raspberry Pi has created a whole new class of computer that has transformed the way engineers design control systems in industry. Before Raspberry Pi, each industry had its own suppliers of control computers, which in turn reduced competition and lowered quality. The robust and flexible Raspberry Pi has swept this market away and over half of Raspberry Pis are now sold to industry.

The Pi has also proved phenomenally successful in its original educational ambition. Over 12 million devices have been sold in total, re-engaging people with the power of coding, and helping to ensure that future generations are equipped for the increasingly digital jobs of the future. This success has been enabled by the Pi’s affordability: the product has been developed at a price-point that makes it accessible to anyone: just $35 (£28) for the flagship product, or an even smaller version, the Raspberry Pi Zero, at $5 (£4).

The MacRobert Award, run by the Royal Academy of Engineering and supported by the Worshipful Company of Engineers, has recognised many technologies that have since become ubiquitous, such as the catalytic convertor and the CT scanner, whose inventor Sir Godfrey Hounsfield won the MacRobert Award in 1972, seven years before he received the Nobel Prize.

MacRobert Award winners are chosen by a panel comprising some of the most experienced names in UK engineering, who are all Fellows of the Academy.

Dr Dame Sue Ion DBE FREng FRS, Chair of the MacRobert Award judging panel, said:  “All three of this year’s finalists demonstrate exceptional engineering, but what sets Raspberry Pi apart is the sheer quality of the innovation, which has allowed the computer to be used far beyond its original purpose. By blending old and new technology with innovative systems engineering and circuit board design, the team has created a computer that is cheap, robust, small and flexible. It is manufactured in the UK cheaper and at higher quality than elsewhere. Raspberry Pi’s original educational goal has actually resulted in a computer control system that can influence many different industries.

“Raspberry Pi has also inspired multiple generations to get into coding: children are learning about coding for the first time, often alongside their parents and grandparents. Communities in the developing world are being empowered by the Raspberry Pi and its modern day computing-on-a-budget.”

MacRobert Award Judge Dr Frances Saunders CB FREng said: “The Raspberry Pi team has achieved something that mainstream multinational computer companies and leading processing chip designers not only failed to do, but failed even to spot a need for. With a team of engineers numbering in the tens, not hundreds or thousands, Raspberry Pi has redefined home computing for many thousands of people across the world, even taking 1% of the global PC market. Their refusal to compromise on quality, price point or functionality has resulted in a highly innovative design that has taken the education and maker market by storm, and they have created a world-beating business in the process.”

Over the past decade, Cambridge innovators have dominated - with wins from RealVNC in 2013 and Microsoft Research in 2011, and Cambridge-based finalists in six of the past ten years.

Image: A robot powered by a Raspberry Pi

Raspberry Pi in detail:
The Raspberry Pi Foundation, through its easy to use, credit card-sized microcomputers, is redefining how people learn about and engage with computers. From initially setting out to help increase the number of computer science applicants to the University of Cambridge, the Raspberry Pi team has put the power of computing into the hands of people all over the world.

By doing so, they are helping to ensure future generations are capable of understanding and shaping our increasingly digital world, able to solve the problems that matter to them, and equipped for the jobs of the future.

Around the turn of the millennium, university computer science courses began to see a dramatic decrease in the number of applicants. This is thought to be linked to the demise of programmable home computers like the BBC Micro and Spectrum ZX. As personal computers and games consoles became more complex, fewer young people felt able to access the ‘back room’ workings of computers, reducing the number of hobbyists. At the same time, computer programming was not widely taught in schools. Raspberry Pi is tackling these problems by firing kids’ imaginations about computing with an easy-to-use, powerful and robust programmable computer, at a price-point that makes it accessible to schools: just $35 (£28) for the flagship product, or an even smaller version, the Raspberry Pi Zero, at $5 (£4).

The bargain micro PC can be used as the control centre of just about anything, from creating your own video games to robots, multi-room sound systems, pet feeders, or even scientific experiments.

The apparent simplicity of the Raspberry Pi belies the complexity of the engineering challenges faced by the development team. Designing a computer that cost less than a textbook, without sacrificing size, functionality or reliability, was a mammoth task. In order to maximise its applications, the Raspberry Pi also had to have video and audio capabilities and a wide range of inputs and outputs (such as USB and HDMI). This required highly innovative computer chip and software design to ensure not only that the Raspberry Pi didn’t overheat while performing such intensive tasks, but that it could be used in as many situations as possible. This was achieved through using a printed circuit board (PCB) with multiple layers, allowing components to be decoupled from each other and so increasing the flexibility with which the board could be designed. Raspberry Pi also makes use of a microchip designed in partnership with the Cambridge and Bristol offices of Broadcom Ltd to deliver best-in-class multimedia performance with limited power consumption. General purpose input/output (GPIO) pins allow any external device to be connected, giving it a huge range of applications.

Since the first Raspberry Pi was launched in 2012, the organisation has gone on to sell 14 million to makers, schools, and increasingly to industry. The unexpected industry demand stems from the reliability of the design; only five in every million Raspberry Pis experience failures (the typical industry rate is 1 in 1000) thanks to its partnership with Sony, which manufactures them in Wales more cost effectively and to higher standards than overseas.

Raspberry Pi is a not for profit organisation. The success achieved by the commercial arm - Raspberry Pi Trading – generates millions in profits that are then used by the charitable Raspberry Pi Foundation to help teach people about computing. Through initiatives such as Code Club, Raspberry Pi helps 85,000 UK children in 5,750 weekly Code Clubs learn the basics of coding. This reach is not limited to the UK; there are 4,500 Code Clubs outside of the country, teaching basic computing skills in 27 languages through 1,084 Raspberry Pi Certified Educators.
The unprecedented success of the Raspberry Pi, alongside a number of other initiatives, is helping to boost applications to university computer science courses, with many citing Raspberry Pi as their inspiration.

First presented in 1969, the MacRobert Award is widely regarded as the most coveted in the industry. Founded by the MacRobert Trust, the award is presented and run by the Royal Academy of Engineering, with support from the Worshipful Company of Engineers. For more information, visit:www.raeng.org.uk/prizes/macrobert

Previous winners include EMI Ltd, who in 1972 developed the CT Scanner, a vital medical device that can now be found in almost every hospital in the developed world. In 2002 Cambridge Display Technologies won the MacRobert Award for its light emitting polymer displays for televisions and smart phones. In 2014 the Award was given to Cobalt Light Systems, which pioneered a technique to determine the chemical composition of materials in containers and behind a range of other barriers including skin, for use in airport scanners and medical diagnostics.

Last year’s winner was Basingstoke-based Blatchford, developer of the Linx - the ‘world’s most intelligent prosthetic limb’. The Linx is the first ever prosthetic limb with integrated robotic control of the knee and foot; a system in which the parts work together like a human leg. To do this, the Linx uses a network of sensors across both the knee and foot, which act like human nerves, continuously collecting data on the user, activity, environment and terrain. The central computer then acts like the brain, using this data to adapt the limb’s response using pioneering software called Mi. (Motion integrated intelligence). This means the wearer can walk confidently, knowing that the limb will be at the right speed and support level at all times.

The company currently employs 800 people worldwide and in 2015-2016 alone it achieved a 25% increase in global sales. The company invests 10% of its revenue back into further research and development, which means that it is already working on future advances.

The 2017 MacRobert Award judges are: