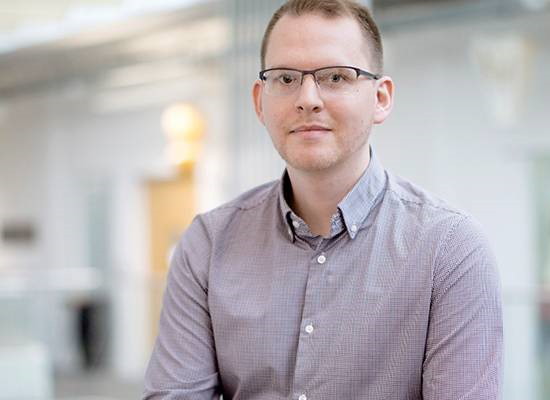 Experts to debate applications, progress and ethics of swarm robotics at Agri-Tech East event on 25 April 2019 in Cambridge.

“Robot swarms will enable truly precise agriculture – targeted spraying of individual plants, and selective harvesting of crops that are actually ripe – rather than treating an entire field uniformly,” comments Alan Millard, Lecturer in Robotics at the University of Plymouth (pictured), one of the speakers at a forthcoming Agri-Tech East event.

Swarm robots – small, simple and inexpensive – promise to reverse the trend in agriculture towards ever bigger machines. These little workers behave autonomously, interacting with each other and the environment to achieve the desired outcome. The benefits include less damage to soil structure and greater precision for weeding and harvesting. But how close is this to reality and what is needed to ensure their safe, responsible usage on-farm?

Experts with different perspectives will be discussing these issues at the Agri-Tech East event ‘Swarm Robotics – the agri-workforce of the future?’ on 25 April 2019.

Speakers include Sam Watson Jones, co-founder of the Small Robot Company, pioneer of ‘robots as a service’; Alan Millard, who is exploring the potential of swarm robots in automating cereal and brassica harvesting; Mark Nicholson, a safety specialist who warns there is currently ‘inadequate regulatory oversight to support farmers’; David Rose, who calls for a mature debate about the technology; and Clive Blacker of Precision Decisions, who will provide insights from the Hands-Free Hectare project.

“Lab-based swarm robots typically feature sensors for obstacle avoidance, a pair of wheels for simple locomotion, the ability to communicate with other robots – such as via Wi-Fi or Bluetooth – and sometimes a gripper for manipulating objects in the environment,” explains Alan Millard. He is currently investigating methods of coordinating autonomous cauliflower harvesting robots in collaboration with Cornish food producers.

He says that the robots are moving out of the lab: “The Small Robot Company and Earth Rover are companies with the closest examples of swarm-sized agri-food robots in the UK. The Thorvald robot is also a promising new agricultural robot platform, which offers great potential for use in swarm robotic systems due to its size and flexibility.”

In an agricultural context, robot swarms can be applied to tasks such as soil and plant health monitoring, weeding, drilling, and harvesting. And as they can work in parallel, they have particular benefits for large areas or for meeting tight deadlines.

Alan is also interested in the applications of robot swarms for soil and plant health monitoring, the use of image processing and the acoustic detection of pests. He says that the benefits extend beyond reducing the size of vehicles and therefore minimising soil compaction and related issues such as pesticide runoff and diminishing yields.

Alan has worked on adaptive systems of maintenance and explains that swarms are also inherently robust as decentralised control means there's no single point of failure. “They can also monitor each other’s behaviour and repair team-mates when faults occur, thus removing the need for human intervention.”

However, David Rose, Lecturer in Geography at University of East Anglia, argues that responsible innovation requires inclusion of users from the start and consideration should be given to three questions before starting on an innovation pathway: who benefits? Who loses? Who decides?

“All too often, decisions are made by powerful technology companies without the inclusion of user voices. Robotics might promise increased yields and profitability but there may be negative consequences that might mean we shouldn’t go down that route,” he says.

Clive Blacker, CEO of Precision Decisions, comments: “If we want more output from smaller machines we will need to work them for longer or need more of them. We are still very much in early phases of robotics in agriculture and unsure of the size of a fleet that may be needed to make it competitive. These are all questions we are trying to work out.

“However what is clear is that automation on-farm will occur in one stage or another and smaller robotic machines have some really compelling benefits, which will also need developing and exploring before the market is comfortable to adopt them. That said there is no lack of appetites or interest from farmers to know what this may look like in the future.”

Mark Nicholson, Senior Lecturer in Systems Safety at University of York, agrees that a bigger picture should be taken. He says: “Management of the safety of workers and other land users remains a priority, and there is a lack of clarity over the roles and responsibilities of those deploying Robotics and Autonomous Systems (RAS). A proportionate risk-based approach is needed to support farmers.”

He also adds that although there are a number of technical issues and changes in agricultural practice to be addressed he thinks a five to ten year timeframe for adopting RAS is realistic.

Dr Belinda Clarke, Director of Agri-Tech East, the independent membership organisation that is facilitating the rapid growth of the agri-tech cluster, comments that many of the innovators of agri-robotics are close to the end users. She says “Sam Watson Jones, co-founder of Small Robot Company, is also a fourth generation Shropshire farmer; Earth Rover has emerged from the Pollybell an organic farm; and Thorvald is supported by the Lincoln Institute for Agri-Food Technology. This close involvement of end users means that the innovators are directed at solving real problems which are easily understandable by the wider community.”

This view is shared by those that supported a Crowdcube equity crowdfunding call by the Small Robot Company, which raised £500,000 within minutes of its launch.

Sam Watson Jones will be speaking at the Agri-Tech East event and says this success is game-changing for Small Robot Company. “We have already made phenomenal progress. Just one year on from our foundation, we already have three prototype robots and an AI that can tell wheat from weed.

“With this backing through Crowdcube, we are now poised to completely transform food production.”

The Agri-Tech East event ‘Swarm Robotics – the agri-workforce of the future?’ is being held on 25 April 2019 at Future Business Centre, Kings Hedges Road Cambridge, CB4 2HY. More information can be found at www.agritech-east.co.uk/events