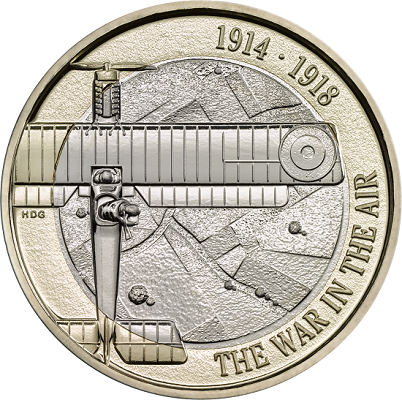 Aviation enthusiasts visiting the Imperial War Museums Battle of Britain Air Show at Duxford this weekend, on Saturday 23 and Sunday 24 September, may receive a rather distinctive £2 coin in their change.

In 2017, The Royal Mint is marking the birth of the Royal Flying Corps, the forerunner to the RAF, with a specially designed £2 coin that remembers the First World War ‘War in the Air’ and the contribution of aviators during the conflict. A limited number of the coins will be placed with IWM Duxford programme sellers at the air show for lucky visitors to look out for in their change.

The design shows two airmen - a pilot and his observer of the Royal Flying Corps - in a Royal Aircraft Factory R.E.8., performing a reconnaissance flight over an area of the Battle of Arras in April, 1917. The land below the plane is shown as a map, which the designer, Henry Gray of agency tangerine design, intended to be a reference to the work the Royal Flying Corps carried out, mapping and gathering intelligence on the constantly changing landscapes beneath them.

Further quantities of the coin will be entering circulation elsewhere in the country over the forthcoming months, but for anyone who wants to guarantee their own Royal Flying Corps coin, commemorative editions in Gold Proof, Silver Proof and collectable Brilliant Uncirculated (‘mint condition’) finishes can be bought at the IWM Duxford shop or online at www.royalmint.com.

At the time of the outbreak of the First World War, few people believed that aircraft would play a major role. Hot-air balloons had been used for observation and reconnaissance for almost 100 years and it was thought planes would serve a similar purpose.

The Royal Flying Corps, the aviation branch of the British Army, began its life as an ‘eye in the air’, reporting on the positioning of enemy forces and providing a tactical advantage. It grew from a force of a few hundred aeroplanes in 1914 into a huge, independent air arm of thousands of combat and support aircraft. In 1918 the Royal Flying Corps became the Royal Air Force we know today and has defended the skies ever since.

Anne Jessopp, The Royal Mint’s Director of Consumer Coin said: "The Royal Flying Corps £2 coin design recalls the brave and skilled work of the reconnaissance photography crews of the newly formed Royal Flying Corps during the First World War. They played an important role in creating reliable maps and intelligence in unfamiliar and constantly changing landscapes.”

The design and its designer

The coin was designed by Henry Gray of agency, tangerine design. The grandfather of tangerine director Dan Flashman, flew reconnaissance over the trenches.