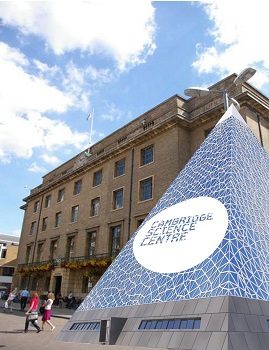 Rapidly becoming a major Cambridge city centre attraction, the hugely popular Cambridge Science Centre clearly needs a centre stage home in the centre of Cambridge. With its proven ability to engage the community, academia and business, to attract tourists and support the local economy by showcasing and offering hands-on access to Cambridge’s most famous products - knowledge and discovery – it’s blindingly obvious why the centre needs to be at the heart of the city.

“Cambridge needs an over arching vision”, says new CEO Cindy Forde, “As Cambridge grows we need to ensure that our history and reputation for being at the vanguard of the democratic spread of knowledge is central to the experience people have living in, working in or visiting Cambridge. We can’t afford to have our city’s heritage drowned in a tide of chain stores or a sea of fudge!”

The search for space in central Cambridge is one many people may feel is best undertaken with a microscope, but Cambridge Science Centre researchers and engineers have faced the mission with signature guts and ingenuity. A design will shortly be unveiled for a revolutionary new building for the centre currently housed, courtesy of Jesus College, in a shop front in Jesus Lane.

A Louvre style pyramid entrance outside the Guildhall will lead visitors into a subterranean miracle of modern architecture. Cambridge Science Centre innovators have worked with an international consortium to combine technology refined during the building of the Channel Tunnel in Europe and the Burj Khalifa in the UAE to create the world’s first Mantle Scraper. A phrase coined by Chief Engineer Dr Legg-Pullen to describe this, quite literally, ground breaking, way of creating habitable new dimensions deep into the Earth’s core.

Structural analysis shows the Mantle Scraping technology can support one more storey than the Burj Khalifa itself, so down to a maximum of 164 floors. The Cambridge Science Centre will however, begin with a modest initial descent of ten underground floors with plans to descend by one storey each year as the centre develops.

A select group of dignitaries and leaders of the business, academic and local community will be invited to an unveiling of the plans later this month.

The Cambridge Science Centre is an educational charity which hosts hands-on exhibitions, workshops, shows and talks to get the public excited about science and technology. Now the home of science has a home for science.