Scientists capture the sound of sunrise on Mars 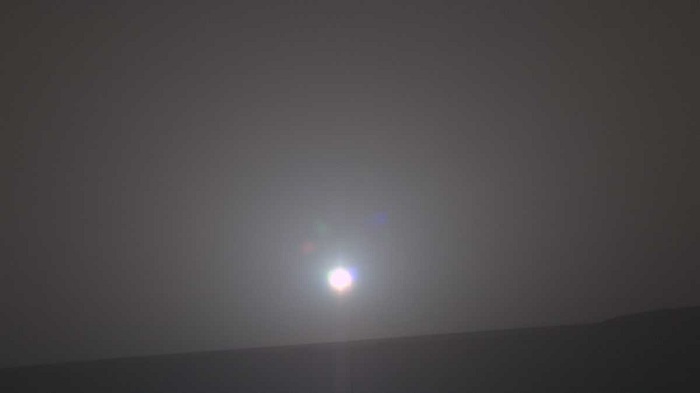 Scientists have created the soundtrack of the 5,000th Mars sunrise captured by the robotic exploration rover, Opportunity, using data sonification techniques to create a two-minute piece of music.

Researchers created the piece of music by scanning a picture from left to right, pixel by pixel, and looking at brightness and colour information and combining them with terrain elevation. They used algorithms to assign each element a specific pitch and melody.

The quiet, slow harmonies are a consequence of the dark background and the brighter, higher pitched sounds towards the middle of the piece are created by the sonification of the bright sun disk.

Dr Domenico Vicinanza, of Anglia Ruskin University, and Dr Genevieve Williams, of the University of Exeter, will present the world premiere of the piece, entitled Mars Soundscapes in the NASA booth at the forthcoming Supercomputing SC18 Conference in Dallas next week (13 November).

The piece will be presented using both conventional speakers and vibrational transducers so the audience could feel the vibrations with their hands, thus enjoying a first-person experience of a sunrise on Mars.

Opportunity is a robotic rover that has been providing photographic data on Mars for NASA since 2004. Earlier this year, it ceased communications following a dust storm. Scientists hope that it may resume its function later this year.

Dr Vicinanza, Director of the Sound and Game Engineering (SAGE) research group at Anglia Ruskin, said: “We are absolutely thrilled about presenting this work about such a fascinating planet.

“Image sonification is a really flexible technique to explore science and it can be used in several domains, from studying certain characteristics of planet surfaces and atmospheres, to analysing weather changes or detecting volcanic eruptions.

“In health science, it can provide scientists with new methods to analyse the occurrence of certain shapes and colours, which is particularly useful in image diagnostics.”