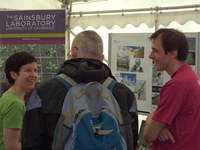 Researchers at the Sainsbury Laboratory, University of Cambridge (SLCU) have had a busy spring, participating in several public engagement events aimed at future plant scientists and the general public.

SLCU’s researchers are developing an increasing range of activities for all ages. During the Science Festival and Festival of Plants, thousands of members of the public were challenged to learn the ABCs of flower development, practice lab techniques like 3d plant scanning and leaf infiltration, assess the impact of temperature changes on seedlings and design their own tree.

Along with activities aimed at children, SLCU researchers have participated in several talks on global food security. Sebastian Schornack’s talk for the Science Festival focussed on the Janus-faced interaction of plants and microbes.  The talk guided the audience through a range of plant/microbe relationships, including plant pathogens implicated in late potato blight, responsible for the Irish potato famine, and bacterial infection affecting rice yields. Feedback from the talk was overwhelmingly positive: The speaker had outstanding presentation skills, enthusiasm and pitched the talk just at the right level.  A great kick-off to my Science Festival experience - if the rest is half as good, I'll be thrilled.

A further series of talks took place later in the spring, with Ottoline Leyser participating in a panel discussion on food security as part of the Cambridge Literary Festival and SLCU hosting two talks on the topic as part of the Festival of Plants. On Friday 16 May, a panel discussion took place on Food Security, Biotechnology and Genetic Modification. The aim was to broaden the discussion on genetic modification and other biotechnologies from the often polarised rhetoric in public discourse to a more nuanced and interactive debate. Feedback from the audience included that the discussion could have gone on for another hour at least!  On the next day, SLCU hosted a talk by Professor M S Swaminathan, one of the founders of India’s Green Revolution and a recognised world expert on sustainable food security.  Podcasts of both these events will be available shortly.

Following this busy outreach period, SLCU is now preparing for a series of public engagement activities in September and October.  The lab will be participating in the University’s Open Cambridge and Alumni Weekend events, as well as the Big Biology Weekend and the Festival of Ideas.  Further details will be posted in the news section of SLCU in due course.

The Sainsbury Laboratory Cambridge University (SLCU) is a new research institute funded by the Gatsby Foundation. The aim of the Laboratory is to elucidate the regulatory systems underlying plant growth and development.