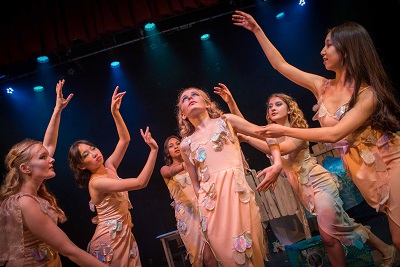 Audiences entered an atmospheric fantasy world at the bottom of the ocean last week when Polly Teale’s 21st century adaptation of ‘Mermaid’, a play about growing up, the rise of self-consciousness and the loss of innocence, was brought to life by Senior School students at St Mary’s School, Cambridge in a radical new production directed and designed by Head of Drama Esther Roberts and Speech and Drama teacher Kate Weber.

This captivating and timely story presented Hans Christian Andersen’s tale of love, loss and desire in a wholly new light.  Delighted audiences were transported between a contemporary setting where Blue (superbly played by Drama Scholar Lizzie) has an imaginative inner life fuelled by her obsession with mermaids, and the underwater world of these ethereal beings. Blue battles with her desire ‘to live, to love and to feel’ in the human, modern world, which is beset with war, materialism and an obsession with appearance, while her alter ego (the Little Mermaid character played beautifully by Isabel) seeks to leave behind her safer lifestyle beneath the waves where there is no death, pain or separation.

There were compelling and moving performances from all the cast – including Amélie’s harrowing portrayal of the mortal Prince with whom the Little Mermaid falls in love, who has been deeply affected by his experience of war; the powerful and disturbing evocation of the ‘Sea Witch’ by three actors working in perfect unison to bring the character to life; and the gracefully undulating movements of all the mermaids whose continuous motion made the underwater scenes shimmer.

As Esther Roberts, Head of Drama, comments: “This play grapples with how contemporary pressures – social media, poverty, celebrity culture, fake news, ecological collapse – are experienced by a teenage girl named Blue, who has her own issues to contend with, but finds solace and solutions through her imagination as she plunges into the world of the mermaids. We are so proud of the cast and crew! ‘Mermaid’ is such a challenging play to stage, as reality dissolves into fantasy, encouraging us to think about ways of creatively showing a range of settings through lighting, costumes and ensemble movement, including underwater scenes. It was lots of fun finding the physicality of both the mermaids and the Sea Witch, and this was complemented brilliantly by the hair and makeup teams, who created some awesome looks! The music, composed and recorded by St Mary’s Music scholar Maryam, was evocative, haunting and beautiful, as was the choreography, created by our Dance scholars.”

The reaction from the audience was resoundingly positive: all felt they had not only watched an exciting piece of drama, but been given much food for thought.

One parent commented:“Many congratulations to you both and to the cast and crew for such a well-devised and thought-provoking piece. It’s a challenging play but your set, use of movement and ensemble work, lighting, sound and costumes made it very accessible. I thought the girls’ performances were extremely mature and believable. They must have really enjoyed taking part in it and felt proud of their achievements. I’m looking forward to the next one!"

Headmistress Charlotte Avery added: "The play was a bold and complex choice and the staging and proxemics worked so well to contrast time and timelessness, the earth and the water, reality and fairy tale. The realisations of the Mermaids and the Sea Witch were beautiful and horrible respectively. The ensemble set pieces of news reporters, climate change activists, royalty on ships/watching firework displays were imaginatively done. Maryam’s music was haunting; Joe Nicholson’s sound, lighting and set were, as ever, exceptional; and Heather Collison’s mermaid costumes were magical. I applaud the superb direction by our hugely talented Esther Roberts and Kate Weber which enabled every girl to perform to the best of her ability.”

Established on a founding vision which is over 400 years old, our educational provision continues to be tailored for girls.