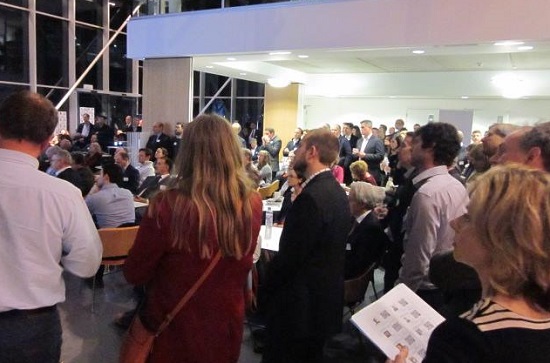 Bright minds from Cambridge University were tasked with summing up their research in two minutes for an audience of potential investors at an event this week.

Hermann Hauser, who is a Cambridge Network founder and director, hosted the event alongside Professor Mark Welland, head of the nanoscience centre at the university’s Department of Engineering.

Professor Welland, who was a driving force behind setting up the event, the first of its kind run by Cambridge Network, said: “It was a hugely successful evening. We wanted to strengthen the relationship between the university and Cambridge Network by show-casing the breadth of the research going on at the university.

“Companies usually see these kind of concepts once they’re quite advanced, so this was a good window into some of the early stage research going on.

“It would be lovely if this resulted in someone from the audience investing in an idea, but I think if that happens it won’t happen quickly.”

Guests drawn from across the Cambridge business community heard about a variety of projects.

These included a diamond-based computer put forward by Benjamin Pingault, from the university’s physics department, as well as a search engine for shapes used in 3D printing proposed by computer science student Flora Tasse.

Following the presentations, there was a chance for guests to network and talk to students about their research.

Hauser told the presenters: “That was fantastic, you’re all stars! It’s great to see a full house of people here tonight.”

Professor Welland believes the experience will be of great benefit to the students involved.

“They all took it really seriously – there was a selection process and the chosen candidates went through a number of dry runs,” he said.

“I was really impressed by the diversity of ideas, some new and some new takes on existing concepts.

“We said this would be an experiment and we think it was a success. It’s definitely something we’ll be looking to repeat, possibly with a focus on life sciences research, or social sciences and humanities.”