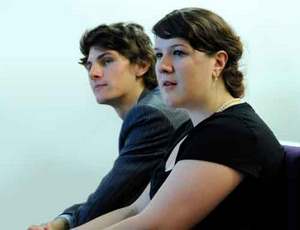 Year in Industry students from two TTP Group companies won the regional finals of the Contributions to Business Awards held on 17 June, and are through to the final eight places in the national competition.

Competing against 28 applicants in the South East Regional Finals, the two students beat off stiff competition to be awarded places in the finals of the “Contribution to Business Awards”.

To win a place in the national finals, the two students, Alice Stanley and Sam Lloyd, made presentations of their work while at TTP and answered questions from Judges. The seven judges were looking for a high level of professionalism and confidence in the work undertaken. As well as the prizes from the regional finals, the occasion was made all the more memorable by letters from the TTP Group Board offering congratulations and wishes of good luck for the finals.

Alice Stanley, a Year in Industry student at TTP LabTech, gave the judges details of her work on quality control of sensors which are used in one of TTP LabTech’s instruments. Alice, a former pupil of the Perse School in Cambridge, is an Oxford undergraduate and she will return to her studies there later in the year. Alice said “I had lots of students coming up to me at the end saying TTP sounded like a great place to work with interesting projects”.

Sam Lloyd, a Year in Industry Student at The Technology Partnership (TTP), has been working on TTP’s novel disc pump technology which is used in medical products and household applications. Sam joins Cambridge University at the start of the new term.

Sam and Alice will appear with just eight other students in the final competition which takes place in September. The overall winner will receive £1,000.

TTP Group companies have been long term supporters of the Year in Industry programme. And over the years, several former Year in Industry students have finished their studies and are now permanent members of staff.

TTP Group plc is Europe’s leading independent technology, product development and incubation company and its primary objective is to create new business based on advances in technology. It is the holding company for The Technology Partnership plc, TTP LabTech Ltd, TTP Venture Managers Ltd, Melbourn Science Park Ltd, and Tonejet Ltd. The company, established in 1987, is headquartered on Melbourn Science Park (near Cambridge, UK) and currently employs over 300 people in its businesses, the majority of whom are scientists and engineers.