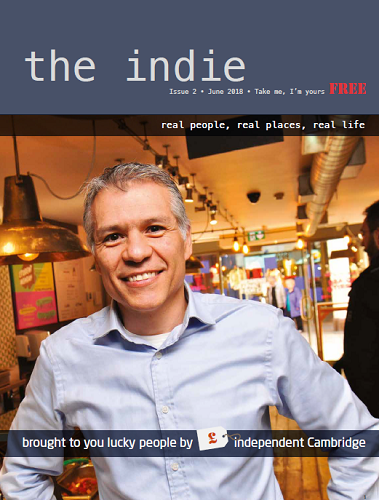 As Independent Cambridge - which champions the city's best independent traders, venues and events - continues to build its thriving online community, it now seeks corporate sponsors for The Indie, its full-colour tabloid magazine, published to promote indie people and businesses in Cambridge and the surrounding area.

The second edition of The Indie has just been published, showcasing more than 20 independents who enjoy IndiePro membership.

For potential sponsors, it offers wide exposure to a growing indie membership as well as to the wider public, as it is distributed around the city by Outspoken Delivery!, dropped in bulk at indie pick-up points and given to all the indies featured in each edition.  Anyone interested in sponsoring The Indie 3, which is due for an autumn release, is invited to contact Anne Beamish, The Indie’s editor. Advertising packages are also available.

The latest edition features bespoke images and a dedicated write-up for each of a diverse group of businesses, from Nanna Mexico and Cambridge Wine Merchants (Cherry Hinton Road) to Taank Optometrists and The Cambridge Flower School. It also includes a handy ‘at-a-glance’ directory, featuring all current IndiePro members.

The publication is open to all independently-owned businesses – large or small – within Cambridgeshire or with a CB postcode. Anne Beamish says: “If you own or run an independent business or you are an indie trader/artist/maker etc in Cambridgeshire, then you can become a member of Independent Cambridge."

Members, who receive regular promotion on the website and via social media channels, are also included in the  ‘indie of the week’ series here on the Cambridge Network.

Read the online edition of The Indie