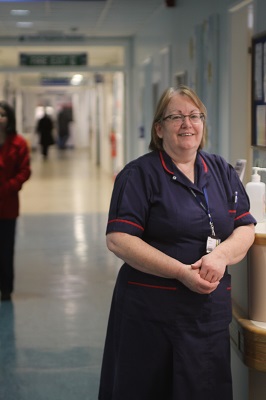 For diabetes midwife specialist Kerry Stubbington, managing diabetes in pregnancy is all about education. “We can’t be a nanny state and control people’s eating and exercise levels directly. But we can put the information out there, show them how to administer self care, and hope the results are positive.”

Diabetes is on the increase in the UK. Since 1996, the number of people with the condition has risen from 1.4 million to 2.9 million and is estimated to rise to 4 million by 2025.*  A growing number of those affected are pregnant women who have type 1 and the risks for their babies are significant. The foetus can suffer from increased growth and physical abnormalities and the chances of miscarriage or still birth is higher than in the general population.

At the Rosie Maternity Hospital in Cambridge, Kerry Stubbington (pictured) is part of a team of specialists who are experiencing the rise first hand. “If you have type 1 diabetes, your body starts destroying your insulin producing cells and you never get them back. Type 2 is more about lifestyle, exercise and obesity and usually comes later on in life. It’s not clear what causes type 1 but in the last 30 years the number of pregnant women with the condition has doubled.”

Type 1 is different from Gestational Diabetes which usually appears from 28 weeks of pregnancy. But it presents the same risks to the unborn child and is treated and managed in the same way. “The critical thing is to get good blood glucose control. Is the patient on the right medication, are they using it properly; are they testing  their blood sugars appropriately? It’s a very difficult condition to live with because it’s affected by everything you do. It’s hard for people to watch absolutely everything they eat and to think about how much exercise they do day by day, let alone cope with it all alongside the usual worries of pregnancy. So it takes a lot of time and education to strike the right balance.”

Kerry began her career in 1981 when she had originally wanted to become a Health Visitor. She thought she’d get there  through midwifery but after she qualified she loved the job so much, she decided to stay. She has followed her career around the country --  from Newcastle and York to Essex and Cambridge – and when she got to the Rosie, she found herself specialising in diabetes “Twelve years ago, specialist midwife roles were in their infancy. I picked it up from another midwife who was leaving the post to travel abroad and at first, I really learnt my skills on the job. Today, with the growing need for the service, it’s seen more and more as an essential part of the midwifery team.”

The unprecedented rise in patients with type 1 has put a significant strain on health services. But Kerry and her team at the Rosie are unphased. “We run a very busy clinic and give the best possible care to the women who come to us for treatment. We operate as a very close team to support the ladies. I find the job fascinating as I work with some extremely clever people and I feel lucky to do that because they’re happy to share their knowledge. You could have four or five different medical specialists in a room trying to help one woman have a healthy baby. It’s humbling to see that.”

“When I was training in Essex, we thought of The Rosie as this magical place we sent all our high risk ladies and they miraculously got better. So when I got the opportunity to work here I was very excited.”  In October 2012 a new £30m extension opened which offers women from across the East of England, a state-of- the-art Birth Centre, Neonatal unit and Close Observation Unit.  The Queen and Prince Philip were invited to open it as Kerry recalls,  “We were told at first that we were only going to meet  Prince Philip, but when she saw us in uniform, the Queen came over too, so we met them both! It was really exciting, we were high as kites!”

Recruitment is an NHS wide problem across the UK at the moment, but in the Rosie’s diabetes midwifery unit, Kerry and her team are at capacity. “People want to work here because the Rosie has such a great reputation. Being a regional centre, we are lucky that we can pull in other specialities if we need them . There’s a cardiac clinic, a twins clinic, we have foetal medicine specialists and the teams on the main Addenbrooke’s site are always ready to help us if the woman has further complications outside her pregnancy. “

For Kerry, the next challenge for midwifery isn’t recruitment  but retainment. “People come and go because of the kind of person who’s  attracted to the job. Many of the women have time off to have babies themselves, some go travelling, others move on to other places for their careers and there’s a large group of us now who are preparing for retirement.  It’s difficult for managers to balance all that.”

Midwifery has come a long way since Kerry started over 30 years ago. Women no longer stay for days on the ward and babies of diabetic mothers are seldom taken from them to stay in intensive care. But Kerry is clear how the service will need to evolve in the future. “ To push midwifery into the coming decades we need compassionate, caring midwives but also ones that are academically sound. Although we try to keep the process as normal as possible, there is also so much technology used to monitor and treat diabetic patients now that we should be looking for people with a scientific or mathematical background.” But one thing won’t change and that’s the emotional pull that draws people to the profession in the first place “ Anyone planning to be a midwife will always need that care and compassion in their soul. Because no matter how difficult the circumstances or what tricky bit of kit you need to master next, at the end of it all, you’ve still got to feel empathy in your heart, so that you can care for that person.”