The Welding Institute year in review 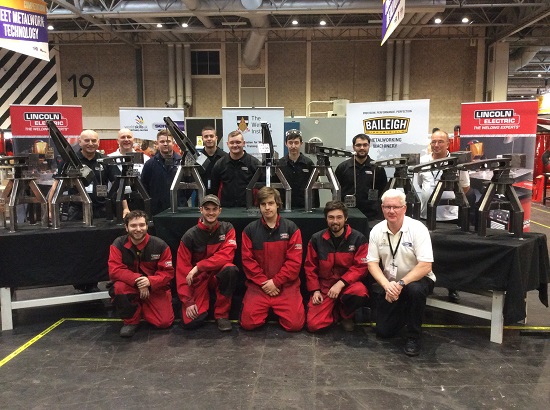 With the decorations up and staff sporting their festive jumpers, The Welding Institute is getting ready for Christmas. Yet, as thoughts turn to mince pies, mulled wine and a certain red-suited gentleman delivering gifts, it is also time to reflect on 2017 and look forward to the New Year at The Welding Institute.

It has been another successful and productive year for us all, not least due to the fantastic hard work and dedication from our various branches and volunteers, who have once again achieved so much over the past 12 months.

Firstly, there were some terrific fundraising efforts including £3,000 raised by a masquerade ball held at Turf Moor in Burnley by the North Western Branch. This money went to the GEM Appeal, a charity dedicated to finding a cure for genetic disorders in children, as well as to Derian House children’s hospice in Chorley. A group of colleagues from the North Western Branch, dubbed the Lancashire Lads, also raised £2,500 by taking two black cabs on a 1400 mile run from Dover to Benidorm. Elsewhere, the Teesside Branch raised £600 from a raffle at their annual dinner while the Scottish Branch also used their annual dinner to raise money, donating £1,000 to two separate charities; ‘Who Cares Scotland,’ who support young people around the country, and ‘Multiple Sclerosis Society Scotland.’ The Highlands and Islands Branch raised money through their annual dinner as well, with £800 split between the Highland Hospice and Maggie’s, a centre to help those affected by cancer treatment at Raigmore Hospital in Inverness.

Aside from the various fundraising efforts, there were also some great events and meetings to help promote awareness of The Welding Institute. The London Branch were particularly prolific in this, holding joint meetings with the London Materials Society, the London Branches of the Institute of Corrosion, the Institution of Mechanical Engineering, and the Offshore Engineering Society.  The London Branch’s younger members also held a more informal gathering to connect with their counterparts from other institutes and institutions, while educational visits to the Whitechapel Bell Foundry, the Kirkaldy Mechanical Test House, and the Brooklands Aviation, Bus and Car Museums at Weybridge all proved popular. There was also a special meeting at Milton Keynes College back in April to provide information on The Welding Institute, offering students a chance to speak with Members and receive a technical presentation.

The Sheffield Branch had a busy year too, for example, supporting the 2017 Engineering Award event for Rotherham College, which recognises students for their achievements in their programme of study, including recognition for fabrication and welding crafts. Meanwhile, the Teesside Branch supported a technology tournament held by the Whitby Rotary Club for teams from North Yorkshire schools, and the Highlands and Islands Branch gave an award to the top welding student from the University of the Highlands and Islands.

There was also plenty of opportunity to reach out and promote STEM careers to a whole new generation, with both the Sheffield Branch and the Teesside Branch among those delivering Welding with Chocolate events, to hundreds of students.

Competitions were big news again in 2017 as well. SkillWeld saw apprentice and trainee welders from around the UK go head-to-head, with the final held at The Skills Show at the NEC in Birmingham in November. UK competitors for the EuroSkills and WorldSkills competitions, taking place in Budapest in 2018 (EuroSkills) and Kazan, Russia, in 2019 (WorldSkills), will be selected from SkillWeld finalists.  The Welding Institute also supported for the Construction Metalwork finals at WorldSkills through the Association of Welding, Fabrication, Training and Education (AWFTE).

Once again, we would like to thank all of our Branch Members and volunteers for your sterling work throughout 2017, whether that is promoting welding and joining activities in schools, assisting in assessments, creating editorial content for journals, fund-raising, or helping organise and speak at events.

As ever, it has been a pleasure to work alongside our members to help promote, inspire and support technicians and engineers in their career and life progression. The Welding Institute is run by its members for its members; the professional titles that it is licensed to award can only be done through the peer review that is essential to professional registration. Please rest assured that all your hard work has not gone unnoticed, and The Welding Institute would like to take this opportunity to say how truly appreciative it is of its conscientious and dedicated members and volunteers. The Welding Institute simply would not be here without the ongoing support of its members and volunteers alike.

So, all that remains is to wish you a very Merry Christmas and all the best for 2018.