Turbo Clean tackles the most unloved job in the commercial kitchen 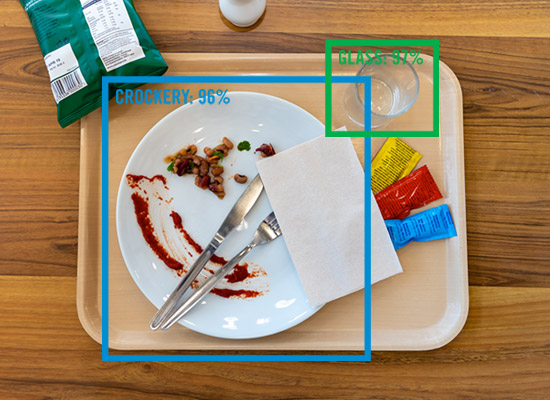 Cambridge Consultants has delivered a prototype automation system that addresses one of the most unloved tasks in commercial kitchens. Using a combination of strategic business consultancy and expertise in Artificial Intelligence (AI) and robotics, ‘Turbo Clean’ automates the process of clearing food trays and washing dirty dishes.

The automation system is part of a wider business transformation initiative undertaken for a multinational commercial catering company. Turbo Clean clears customers’ trays in commercial catering kitchens. Combining deep learning, machine vision and robotics, it recognizes the contents of returning food trays, removes the items from each tray, including food waste and cutlery from plates, glasses and other crockery, and loads the different items into a dishwasher.

Cambridge Consultants first analyzed the kitchen tasks most suitable for automation; identifying those that would generate not only commercial value, but human appreciation, and that would be welcomed by management and staff alike. After conducting primary research within many commercial catering operations, Cambridge Consultants pinpointed the single process that staff most wanted to automate, and that would yield the best business benefits: clearing trays and washing dishes.

The new bespoke automation system resulted in the creation of significant intellectual property (IP) for the client’s business. The result is an entirely new kitchen cleaning procedure whereby one food tray can be processed every six seconds. The deep learning-based system was trained using images of thousands of trays with every conceivable combination of messy crockery. The machine vision not only recognizes items and waste on each tray in milliseconds, but can also classify items such as bowls, plates, glasses and cutlery. Taking this a step further, Turbo Clean boasts the ability to identify new variations of items, meaning it can cope with new sets of crockery and cutlery, without the need for reconfiguration.

“It’s widely accepted that AI and robotics will impact almost every business. But it’s vital to understand both what is technically possible and what is commercially viable, to ensure that a business thrives through this time of technological revolution.” said Nathan Wrench, Commercial Director, Cambridge Consultants. “Working with our client, we were able to design a system that uses a novel combination of technologies and to take them from initial discovery right through to the prototype ready for commercialization. We look forward to continuing our support in the future.”