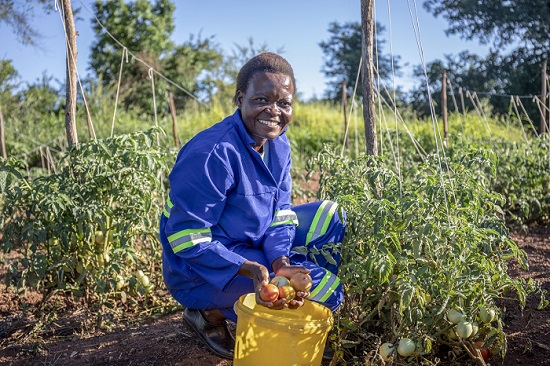 The Campaign for Female Education (CAMFED) has received a UN Global Climate Action Award in the ‘Women for Results’ category for effective and scalable solutions.

Since 2014, members of the CAMFED Association (CAMA) - the network of women leaders educated with CAMFED support - have been taking action on climate change in rural Africa. They have encouraged wide adoption of practical and affordable techniques for climate-smart agriculture, helping to build communities' resilience in the face of climate change. And this month, they will receive the UN Global Climate Action Award in recognition of the effectiveness and potential for scale of their programme.

The award will be presented at the 2019 UN Climate Change Conference (COP25) which will now take place in Madrid, under the Presidency of the Government of Chile, with logistical support from the Government of Spain. Recipients of this UN Award represent some of the most practical, scalable and replicable examples of what people, businesses, governments and industries are doing to tackle climate change.

Climate change is already causing increasingly extreme and unpredictable weather in sub-Saharan Africa, resulting in more frequent droughts and floods. Despite contributing negligibly to greenhouse emissions, women in rural Africa are first to feel the effects of climate change as they struggle to cultivate the land to produce enough to feed their families. Climate change is thus compounding the resource gap that women farmers have long faced compared to men.

In response, CAMFED worked with the Mastercard Foundation and EARTH University to launch a breakthrough initiative to equip young women graduates to become climate-smart Agriculture Guides. Agriculture Guides have improved the productivity, sustainability and profitability of their own smallholdings and reached more than 8,500 individuals, mostly women and other young people, through demo farms, community workshops and mentoring. They proffer simple solutions that respect indigenous traditions.

Techniques include drip-irrigation using waste plastic bottles; mulching whereby compost is added to the soil to reduce erosion and improve nutrition; inter-cropping where two plants are grown on the same plot to enhance yields; and agro-forestry to protect trees on agricultural land.  The model has been delivered successfully in Zimbabwe, Zambia and Tanzania.

“We are so excited about this global recognition of CAMA’s leadership in climate-smart agriculture. As a network, we are developing and sharing expertise that ranges from better land management and tackling deforestation to the use of climate-smart crops, solar heating and traditional refrigeration techniques. Our network enables us to cascade our knowledge to farmers across numerous rural districts, helping to build resilience to climate shocks while improving productivity, reducing emissions, and nourishing school communities. This award celebrates what is possible when we all work together to tackle two of the most urgent issues of our time: girls’ exclusion from education, and climate change." said Clarah Zinyama, CAMFED Association (CAMA) National Chair and Agriculture Guide, Zimbabwe.

The CAMFED Association’s climate-smart Agriculture Guides have been recognised in the ‘Women for Results’ category, which celebrates “activities that demonstrate the critical leadership and participation of women in addressing climate change.”

The CAMFED Association is a movement of 140,000 educated African women of whom around one-third are farmers and agripreneurs. Among them are pioneers now spearheading action on climate change with huge potential to reach out to tens of thousands within their network and beyond. With the investment in girls' education by the UK Department for International Development (DFID) and others, a new generation of educated young women is ready to take up the challenge.

“It is our pleasure to award the Campaign for Female Education’s breakthrough initiative.” said Niclas Svenningsen, Manager of the UN Climate Change Global Climate Action Program. “Their project serves as a beacon, guiding us towards a more resilient future for all. Their project trains young women from poor, marginalized farming communities across sub-Saharan Africa – and in turn provides a shining example of a scalable, effective climate solution, that’s led by young women."

CAMFED’s action on climate change will be showcased at a series of special events during COP25 in Madrid, Spain, this week (December 2-13, 2019).

Image:  The CAMFED Association, CAMA, has 140,000 members across sub-Saharan Africa. A growing number, like Beauty (pictured), have become experts in climate-smart agriculture.