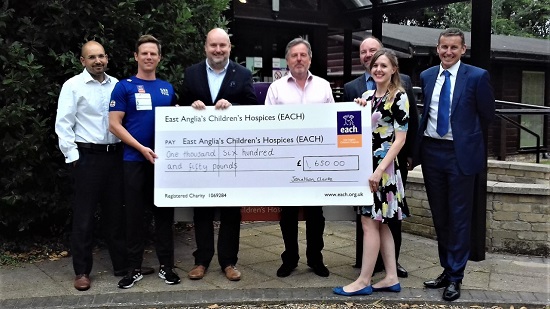 There is just a week to go until a Waterbeach athlete flies the flag for Great Britain at the Triathlon World Championships in Switzerland.

Jonathon Clarke’s kit will not only feature the British flag, though, it will also feature the logo of East Anglia’s Children’s Hospices (EACH).

Jonathon has generously decided to give the charity his sponsorship money, stumped up by Martin-Redman Partners, Lighthouse Advisory Partners and Rathbones, and on a recent visit to the charity’s hospice in Milton handed over a cheque for £1,650. He has since grown that total to £3,700.

“I feel honoured to compete for Great Britain in my age group and wanted to use this opportunity to help raise awareness for EACH, a charity that has a children’s hospice close to my home,” said Jonathon. “EACH cares for children and young people with life-threatening conditions across Cambridgeshire, Essex, Norfolk and Suffolk, and supports their families.”

Lottie Driver, EACH Cambridgeshire Corporate Fundraiser, said: “This is not only a brilliant opportunity for Cambridgeshire businesses, but also fantastic for us at EACH as we rely on voluntary donations for the majority of our income. Jonathon’s helping raise awareness of what we do, too, also really important. We want to say a big thank you to him, and the businesses that have put up sponsorship money, and wish Jonathon the very best of luck in Switzerland!”

Jonathon will be competing in the 35-39 age category at the world championships. He started taking part in triathlon just two years ago and qualified to compete on the world stage in Cardiff last year.

The event takes place between 29 August and 1 September in Lausanne, a city on Lake Geneva that is home to the International Olympic Committee, and Jonathon will be wearing his kit throughout.

There is still time for people to show their support at https://www.justgiving.com/fundraising/jonathon-clarke1

Image: Jonathon Clarke in his British kit and EACH’s Lottie Driver alongside representatives of the companies that have sponsored Jonathon.