Why it wasn’t polite to puff in Regency England 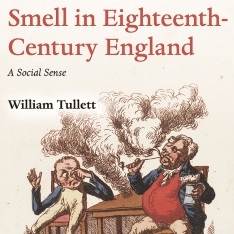 A new book reveals how banning indoor smoking and vaping isn’t a modern concept, with the Georgians getting there first over 200 years ago.

In Smell in Eighteenth-Century England: A Social Sense, Anglia Ruskin University (ARU) historian Dr Will Tullett discusses how smoking was frowned upon by polite society in Regency England.

In its place, snuff became fashionable and smoking was relegated to alehouses and gentleman’s clubs. A segregation of scent – and to some extent the sexes – was taking place.

Dr Tullett, Lecturer in History at Anglia Ruskin University (ARU), said: “During the late eighteenth century, pipe-smoking was forced from many fashionable venues. At balls, theatres, and aristocratic parties it was no longer polite to puff.

“There was no need for legislation: the censure of fashionable manners was enough to relegate pipe-smokers to the status of persona non grata. A letter published in a London magazine celebrated that ‘smoking has long been on the wane’ among the fashionable and polite. This was as it should be, since ‘every individual has an inalienable right to pure respirations of the atmospheric element’.”

In his book, Dr Tullett argues that the importance of smell – to societies past and present – is too often neglected. Among the senses, smell is possibly the least understood and its loss least appreciated. He explains how the eighteenth century witnessed the commercialisation of perfumery, the spread of new consumables such as tea, coffee and tobacco, and encounters with new scents.

Coffee was initially described as having a “satanic stench” comparable to old shoes or faeces. By the mid eighteenth century the smell of coffee was not considered worth commenting on at all. A once novel smell had become ordinary. Whilst Georgians adapted to the scent of coffee, tobacco was different.

Dr Tullett said: “In the early eighteenth century men were prolific smokers. In the coffee houses of London men lit their pipes and discussed politics under clouds of smoke. Magazines talked of husbands shooed out of the house to smoke their pipe, with their wives fearing that genteel visitors would be offended. A satirical poem told the story of a wife who had banned her husband from smoking, only to allow its resumption: she realised that going cold turkey had made him impotent.

“The eighteenth century saw an explosion of urban sociability. Assembly rooms, theatres, and pleasure gardens were just some of the new venues where men and women conversed and courted. Polite manners dictated that smoking should be expunged from such venues in an effort not to offend the ‘fair sex’.

“In its place, snuff became the fashionable way to consume tobacco. Shoving tobacco up your nose presented its own problems: it led to sneezing, grunting, and spitting. But, unlike smoking, it did not invade the personal space of others.”

And Dr Tullett believes contemporary debates around vaping, and the accompanying clouds of pungent smoke, show that similar tensions are present today in discussions about public and personal space.

He added: “Whilst smoking may have disappeared from public venues, vaping has proliferated. In February 2019 Public Health England published a report assessing the health impacts of vaping. The report made little reference to smell, yet public responses to the report did.

“Today major coffee and restaurant chains have banned vaping on their premises. When eighteenth-century writers discussed the relationship between smell and personal space, they were identifying a tension which still resonates today.”

Smell in Eighteenth-Century England: A Social Sense is published by Oxford University Press next Thursday, 8 August.