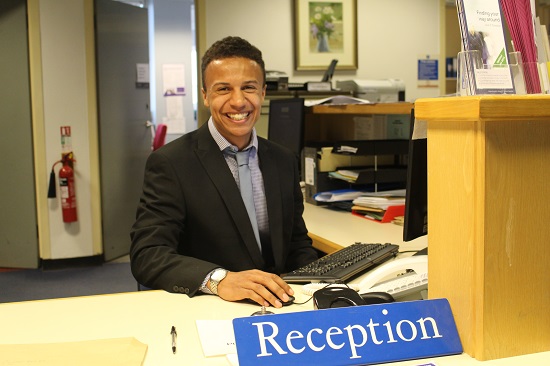 Former professional footballer Miles Smith has swapped his boots for a suit and tie to join a nationally recognised apprentice scheme at Cambridge University Hospitals (CUH).

Miles, who is nearing the end of the year-long programme in the recruitment department, is no stranger to apprenticeships. He was at West Ham United from the age of 12 until 19 and, now 22, currently plays semi-professional football for Histon Town.

“After I left professional football, I thought the apprenticeship at CUH would be a good thing to do to get a better understanding of the working environment and get some valuable experience,” Miles says.

“It is strange for me as I’m used to playing football day-in, day-out, but I’m really enjoying working here at CUH and have learnt a lot in my time here.

“One of the key things to being successful on a pitch is teamwork and that has been a skill that I’ve been able to transfer over to my current role.

“The apprenticeship has given me lots of confidence and I’d like to get a full-time position as a recruitment advisor after I’ve finished my apprenticeship.

CUH’s apprenticeship scheme was recently recognised in the top 100 employers at the School & College Leavers awards – the only NHS Foundation Trust to make the list.

Organised by AllAboutSchoolLeavers.co.uk, the awards were based on the results of anonymous satisfaction surveys filled in by trainees on the relevant programmes.

Since the scheme was set up in association with Cambridge Regional College in 2009, over 326 people have benefitted from apprenticeships at CUH. To give an idea of how quickly the programme has grown, it started with just 12 people.

A really high percentage of apprentices go on to permanent positions at CUH. One of the many success stories is James Fincham, who started as an apprentice in 2010 and has progressed to be executive assistant to the director of corporate affairs, Kate Lancaster.

“It’s great that CUH apprenticeships have been recognised nationally and I’m thankful for the programme,” James said.

“It’s been a fantastic stepping-stone for me and I’ve had lots of support along the way, gaining experience in different departments and developing my skills.”

Linda Hering, employee development manager, commented: “The apprenticeship scheme goes from strength-to-strength and this year we are looking to recruit more apprentices with the introduction of a new patient support apprenticeship to improve the patient experience.

“The scheme forms part of the Trust’s corporate social responsibility to help young people develop their skills and it also makes good business sense to ‘grow your own’ talent.

“The success of the scheme can be seen with the achievement of apprentices being offered permanent positions at the Trust, and several of the apprentices have progressed on to more senior positions.”

Whether or not you're in the market for an apprentice just now, finding out how apprentices could fill much-needed skills gaps in your business - today or in the future - is a worthwhile exercise. Sign up now for Cambridge Network's special Apprenticeship Jobs Fair on Tuesday June 23rd.