Cambridge Airport is extremely pleased to announce that two of its Fire-Fighters (Matthew Lee and Colin Garrett) received awards from Gatwick Airport for achieving top student of the year for the fire-fighter courses in 2010 and 2011. 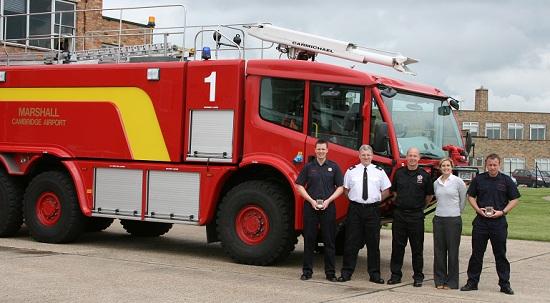 To acknowledge these awards both fire-fighters were presented with a shield and gift voucher by Barry Aldersale, Deputy Airport Fire Manager from Gatwick Airport.

The intensive seven-week Initial Airport Fire-Fighters Course held at London Gatwick Airport is physically and mentally demanding as it requires the students to demonstrate competence in fire behaviour, hose deployment, breathing apparatus, tactics and techniques to deal with incidents involving aircraft, conventional fire-fighting as well as being able to explain a theoretical understanding of pumps and primers, aircraft construction and various other hazards associated with aircraft fire-fighting.

On the successful completion of the Initial Airport Fire-Fighters Course, students are issued with a Civil Aviation Authority (CAA) approved certificate that allows them to operate at fire-fighter level at any UK licensed aerodrome.

Dave Thomas, Senior Airport Fire Officer commented: “To have two students in consecutive years achieve top student of the year is a great achievement and something that makes everyone at the Fire Station at Cambridge Airport extremely proud”.

The Airport now offers new regular airline and tour operator services to destinations across Europe including France, the Channel Islands and Italy.

The airport is ideally positioned for easy access to London with just under an hour’s drive to Canary Wharf and East London, the location of the key Olympics venues.

Cambridge Airport is home to a variety of aviation service providers including charter operator Marshall Executive Aviation, MEA which operates a Cessna Citation Bravo and Citation XLS, as well as a Bombardier Challenger 300.