A rare ‘Eagle’ visits Cambridge on the eve of the Olympics 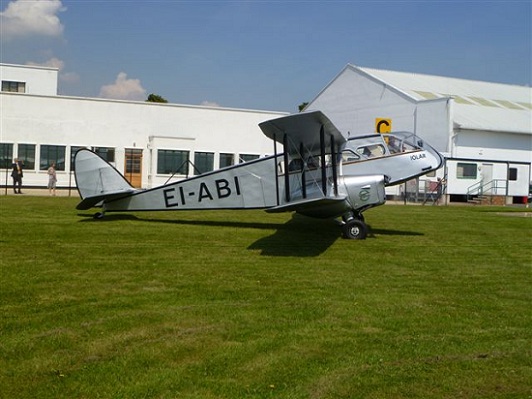 The world’s oldest in-service passenger aircraft, a 1936 de Havilland Dragon, which is owned and operated by Aer Lingus, visited Cambridge Airport on the eve of the Olympic Games.

The first Aer Lingus aircraft was a de Havilland DH84 Dragon EAIBI named Iolar, which in Gaelic means ‘Eagle’.  The aeroplane was delivered to the newly formed Aer Lingus in 1936 an operated between Ireland and Blackpool.

This aircraft, which visited Cambridge, is not the original ‘Eagle’ but is a sister aircraft, which was lovingly restored by Aer Lingus personnel at Dublin Airport, to celebrate the 75th Anniversary of Aer Lingus in 2011.  The aircraft, which was being flown by Captain Pat Murphy, accompanied by Navigator, Clifford Lebioda and Engineer John Fields, was on route from Dublin to Texel in the Netherlands, on route to Berlin for the Berlin Air Show.

Terry Holloway, Deputy Chairman of Cambridge Airport, said:  ‘Marshall of Cambridge and the Airport has very long and deep-routed links with de-Havilland and it was a particular pleasure to welcome this very rare aeroplane to Cambridge Airport.  This particular aircraft was built at Hatfield, Hertfordshire, in 1936 and was personally test flown by the legendary Geoffrey de Havilland on 18 April 1936.  The Airport will be supporting a wide number of similar sized – but more modern – executive aircraft during the next few weeks, during the Olympic Games, which will be handled by ExecuJet through our executive terminal and the arrival of this particular aeroplane enabled us to reflect on our very distinguished aviation heritage at Cambridge Airport’.