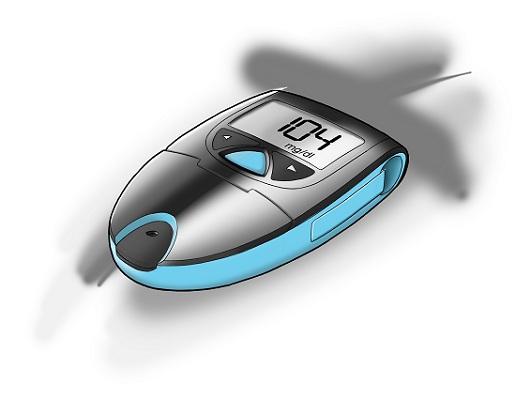 A blood glucose monitor concept for diabetics that’s simpler to use, less cumbersome to carry and has a third of the environmental impact of traditional devices has been developed by Cambridge Consultants. The concept is the latest result of ‘Ecovation’ – an approach developed by the leading technology design and development firm to integrate environmental considerations into its radical concept generation process.

More than 346 million people worldwide have diabetes*, and monitoring glucose levels is a critical part of managing the condition and preventing long-term complications. Insulin-treated diabetics are advised to test blood glucose levels four times a day. Many existing blood glucose monitors require separate lancets, test strips, storage tubs for carrying these items, and sharps bins for disposal. This can mean the devices are fiddly to use, inconvenient to transport, and wasteful.

Applying the Ecovation process, Cambridge Consultants conducted a ‘life cycle assessment’ on a popular blood glucose monitor to identify which elements had the highest environmental impact and so should be the focus for innovation. It was identified that less than 5% of the environmental impact could be attributed to the monitor itself – with more than 70% due to the high number of single-use disposables that are consumed over the lifetime of the device.

Ideas generated to reduce the environmental impact ranged from efficient packing of unused and used components, to safe reuse of ‘single-use’ lancets and test strips. The winning concept achieved a 65% reduction in environmental impact by integrating the functionality of three previously discrete consumables and getting the device to do the handling – not the user. The final challenge was then to create a single consumable cartridge, which was both reliable and suitable for manufacturing.

For the user this novel concept has significant benefits. The integrated monitor design is easier to carry around, with fewer consumables requiring separate storage and transport. The cartridge design means the user only has to worry about loading the device once every 28 tests – and, by combining the lancets and test strips in the monitor itself, the glucose test is far easier to administer and more discreet for the user.

“What makes this concept so exciting is that, while it provides a sustainable alternative to the status quo, it also offers distinct usability advantages,” said Andy Pidgeon, of the Medical Technology division at Cambridge Consultants. “We have long championed combining the safety and reliability of the medical development framework with the broader lens of a consumer experience approach in order to create solutions that patients use both safely and willingly. Adding environmental considerations into the design process through Ecovation provides a framework for a new breed of superior medical devices.”

The approach employed in Ecovation can be applied to any type of product to reduce its overall environmental impact. For example, Cambridge Consultants previously demonstrated the methodology by producing an eco-vacuum concept that uses 43% less energy than the average vacuum cleaner.

“The Ecovation process, as demonstrated by our blood glucose monitor concept, has the potential to make a significant step change in reducing the eco-impact of almost any product,” said Gemma Evans, Senior Consultant in Innovation Management at Cambridge Consultants. “Applying Ecovation principles at the design stage needs to become standard practice if we are to reduce our carbon footprint. But making a product greener should never take away from its reliability or functionality and, as we have demonstrated, it can in fact improve its usability and the user experience while minimising its environmental impact.”