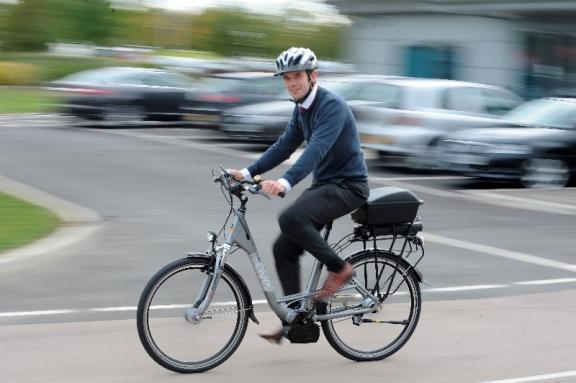 Over four weeks in September and October, 953 participants from 146 workplaces took part in the Cambridgeshire Cycle Challenge. The Challenge is a fun web based competition to encourage people to cycle to work, and was run by Travel for Cambridgeshire, who  promote sustainable travel to employers and their staff across the County.

As well as individual prizes for participants who made the most cycling trips and travelled the most miles, there was also a competition between employers to see who could record the most commuter trips. A certificate and team prize of a Brownie mountain from Chocolicous Cakes was awarded to the top employer in each of the Cambridgeshire districts of CambridgeCity, South   Cambridgeshire, Huntingdonshire and East Cambridgeshire & Fenland.

On Wednesday the first of the four employer presentations was made to Cancer Research Technology , based at the Babraham Research Campus in South Cambridgeshire who clocked up 166 commuter trips and 1,661 miles during the Challenge.

Cameron Bell, who accepted the certificate and team prize on behalf of CRT, said: “We really enjoyed taking part in the challenge and encouraging each other to record our cycling trips to make sure we stayed at the top of the leader board – we are now looking forward to adding back all those spent calories by attacking the brownie mountain!”  Also on site was Michael Coleman, the Babraham Campus Bicycle user group representative, who was an individual winner and recorded an impressive 1,550 miles commuting to and from work by cycle and for other trips during the Challenge period.

Tim Watkins from Travel for Cambridgeshire said “Employers from across Cambridgeshire have stepped up to the challenge by encouraging staff to cycle to work and spurring those who already cycle to do so more often. Cycling is a great way to commute to work to reduce congestion especially during the busy rush hour.”

Employers who missed out this time will have an opportunity to compete again in further Challenges which will be organised by Travel for Cambridgeshire in 2015.