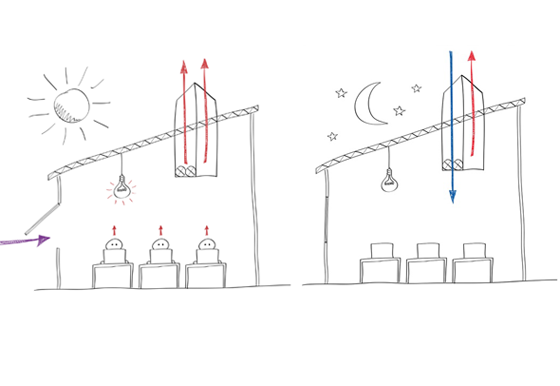 Natural ventilation technology which has the potential to reduce heating bills by as much as 50%, while drastically reducing energy consumption, has been developed by a Cambridge spin-out.

“For most businesses, the environment alone is not enough to sell them on a new technology. People want buildings that are more efficient, but it’s got to make raw economic sense.” — Shaun Fitzgerald﻿

Compared with mechanical ventilation systems, which use several kilowatts of energy to control the temperature of a typical classroom, the natural ventilation technology developed by Breathing Buildings uses the same amount of energy as a single incandescent light bulb. The company, which spun out of the University in 2006, has implemented its technology in more than 100 buildings in the UK, including schools, offices and supermarkets.

Buildings account for around 40 per cent of energy consumption in the developed world. Addressing the inefficiencies of mechanical ventilation systems is one of the primary ways to reduce the overall energy consumption of a building, along with insulation and lighting.

Breathing Buildings is based on researched originally conducted at the University’s BP Institute, into new ways of constructing energy-efficient buildings. The company is based in Cambridge, and has a manufacturing facility in nearby Soham.

While at Cambridge, the researchers developed a control philosophy to regulate the amount of air going through a building, in order that the building can be naturally ventilated.

Dr Shaun Fitzgerald, who led the industrial interface for the research programme at the University and is now Breathing Buildings’ CEO, admits that the company’s solution is - conceptually speaking - “horrifyingly simple.” By using the people and equipment in a room as a source of heat, cooler outside air can be introduced to maintain air quality and comfortable temperatures in the majority of climates, using a minimum of energy.

Instead of the classic British method of opening a window to let fresh air into a room and placing a radiator under the window to eliminate the resulting cold draughts, Breathing Buildings’ solution consists of an opening in the roof and two low-energy fans: one pulling the warm air up and the other ensuring that the cold air enters the room above the warm air. The fans mix the two air streams together, allowing fresh air in while eliminating draughts. The temperature in maintained thanks to the temperature and CO2 sensors contained in the unit, and the control algorithm which regulates the damper, fans speeds and fan directions. The heating bills for an average classroom can be halved using this technology instead of alternate methods.

Breathing Buildings’ technology works best in temperate climates like the UK, where the external temperature during daylight hours is between five and 16 degrees for the majority of the year. “Nearly every building in the UK can be naturally ventilated year-round, without the need for any mechanical systems,” says Dr Fitzgerald. The exceptions are buildings which are both extremely tall and extremely deep, such as a London skyscraper.

The company also piggybacks its technology with conventional mechanical ventilation systems for abnormally hot or cold days, or for climates which are more variable. The company is planning to launch a hybrid system of its own, which could be used in almost any climate.

Most of Breathing Buildings’ sales are to the construction industry, where intelligent ventilation systems are an important consideration in new building design. Although the construction industry is not considered to be one which is particularly open to risk, Dr Fitzgerald says that the conservatism of the industry actually played a part in making Breathing Buildings a better company.

“For most businesses, the environment alone is not enough to sell them on a new technology. People want buildings that are more efficient, but it’s got to make raw economic sense,” he says. “You’ve got to knock down all the barriers which might prevent them from using your technology. The environmental aspect alone may not be sufficient to convince the customer to buy, but it can be an important bonus.”