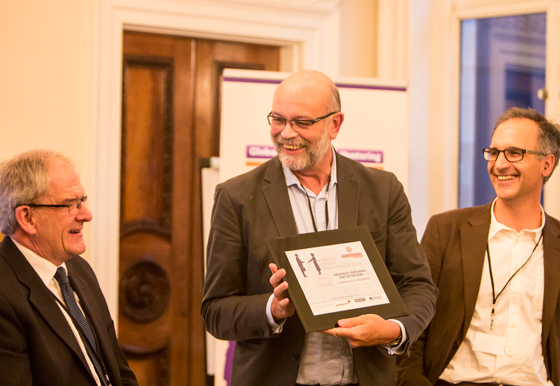 Cambridge Enterprise, the University’s commercialisation arm, was named University Venturing Unit of the Year at a recent ceremony in London.

“Cambridge Enterprise has positioned itself very realistically with industry and investors, and is very good at aligning expectations and opportunities.”
— Sir Richard Friend﻿

With the recent launch of Cambridge Innovation Capital, the University now provides or can facilitate access to funding at all levels of support, from proof of concept to venture capital.

Last year, the University invested a record £2.3 million of its seed funds to support the development of Cambridge spin-outs. The sum, more than triple the amount invested in the previous year, will support a range of companies, including Aqdot, CamSemi, DefiniGEN, Horizon Discovery, Inotec AMD, Lumora, Sphere Fluidics and XO1.

“Cambridge Enterprise was created to provide a service to university researchers wanting to exploit their work,” said Professor Sir Richard Friend, Cavendish Professor of Physics at the University. “This culture of service has been really well established and I think most of the faculty and students who have used its services have been very pleased by this. Cambridge Enterprise has also positioned itself very realistically with industry and investors, and is very good at aligning expectations and opportunities.”