Cambridge Ahead is officially launched 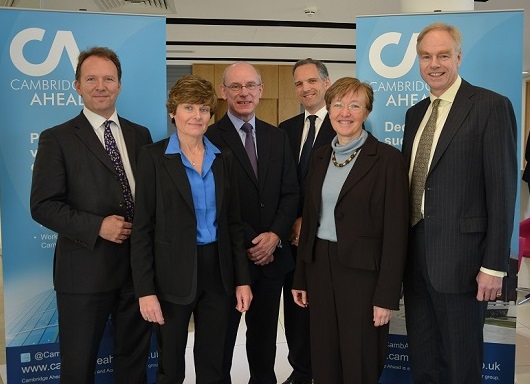 Cambridge Ahead has been officially launched at the offices of Mills & Reeve in Cambridge, with guest speaker Baroness Jo Valentine, CEO of London First.

Here is a brief summary of the three speeches plus an opportunity to download the official press release and the launch brochure:

Baroness Valentine spoke of her background in re-generation and investment projects, concentrating mainly on London First. She explained the many successes in which it has played a part, including the building of the Millennium Bridge, bringing the Olympics to London, the creation of the Mayor’s office, Crossrail, and Congestion Charging. She suggested that the culture is more favourable now for Cambridge Ahead than it was for London First. In its early days, politicians and business people did not know how to talk to each other. Now, the reverse is true.

In his speech, Jeremy Newsum spoke about the role of businesses in a city, arguing that they “should play a larger role in the way in which their town or city evolves. They are a legitimate voice and a valuable one”. He added that businesses can provide a long term perspective, and that planning and consistency can “count as much as policy”. Jeremy emphasised the long term, arguing that short-termism may “grab the headlines” but a focus on the long-term will ensure our children reap the rewards.

As well as emphasising that Cambridge Ahead will not displace any existing group, but add value to existing organisations such as the LEP and Cambridge Network, Jeremy made a special mention of Professor Peter Landshoff, one of the authors of the Cambridge 2030 Vision which reported earlier this year, and who has worked tirelessly for years towards making the city a better place. Jeremy finished with the observation that progress over the centuries has come about via competition rather than cooperation, but in Cambridge Ahead’s case he believed that cooperation is key to the group’s ability to compete with other UK cities and internationally.

After introducing herself via her background in fundraising in London, Jane Paterson-Todd, CEO, talked about the early success in membership that Cambridge Ahead has enjoyed, with 27 Full members to date and with another five expected before the end of the year. She then went on to describe the three projects that the group will be focused on initially and their project leaders. These are Promoting Cambridge (David Cleevely CBE), Clarifying the Growth Agenda (Dr Tony Raven, CEO of Cambridge Enterprise), and Improving the Quality of Life (Professor Mike Thorne, Vice Chancellor of Anglia Ruskin University). The latter is a theme that ran throughout the launch event and Jane talked about the need for identifying measurables as a pre-cursor for being able to define and qualify what we mean by quality of life.

There followed a press conference and a further opportunity for guests to meet each other. Please read the official press release for further information about Cambridge Ahead and visit the website. You can also download the launch brochure.