Cambridge Ahead sets out agenda with release of videos 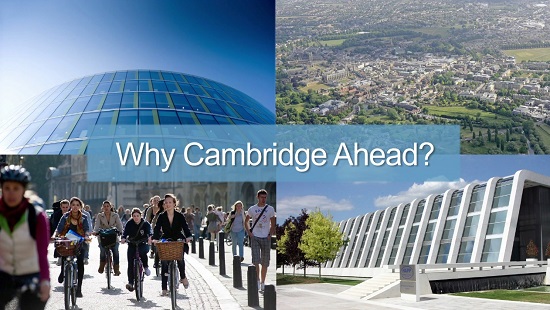 Two short videos have been released by Cambridge Ahead, filmed at its launch on 15th November 2013, which set out its case and agenda. They feature interviews with key figures who provide insight into the group's raison d'être and program for action.

Cambridge Ahead, the business and academic member group dedicated to the successful growth of the city, has released two short videos setting out its case and agenda. The first is entitled Launch Eventand is not only a record of the launch on 15th November attended by over 70 key Cambridge figures but includes brief interviews with guest speaker Baroness Jo Valentine (CEO - London First), David Cleevely (Chairman - Cambridge Wireless), Duncan McCunn (Corporate Director - Barclays Corporate Cambridge), and Professor Peter Landshoff (Chairman - Cambridge Past, Present & Future Planning Committee).﻿﻿