Do not mess around with your flying instructor! 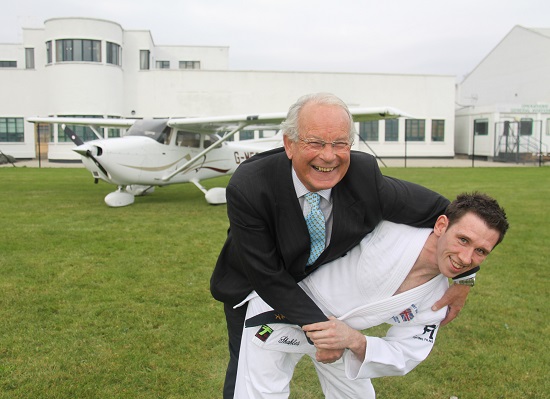 Mike, who has just returned to competitive Judo after a knee operation, added the prestigious Army title to his RAF titles gained whilst a member of the University Air Squadron.  If this accolade was not enough, a fortnight later, Mike was in action once again, at the end of November at the Inter-Services Championships at the Defence College in Shrivenham, where the Army won the team event, with Mike picking up points towards his third gold and his Army Colours, to add to his School Colours and RAF Colours.

Mike, who is a Territorial Army Reservist, serving with No 4 Parachute Brigade, is 28 years old and, as well as being an accomplished Judo Champion, is also an expert skier, snowboarder and mountaineer.

He started Judo when he was five years old at Crathie Judo Club, where his father, who was Manager of the Royal Lochnagar Distillery, was the Coach.  After school Mike was educated at Herriot Watt University Edinburgh, where he gained his enthusiasm for flying as a member of the Edinburgh University Air Squadron.  Mike has been a Flying Instructor at the Cambridge Aero Club for the past two years.

Terry Holloway, Managing Director of the Cambridge Aero Club, said, ‘We are absolutely with Mike’s success in Judo and other sports  but apart from that he is also a highly accomplished and very popular Flying Instructor.  We are also enormously proud of his work as an Army Parachute Reservist.'