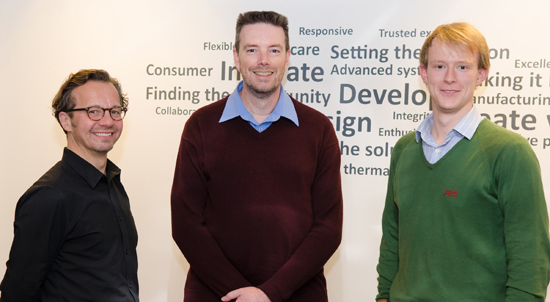 42 Technology has kicked off 2014 with the appointment of three additional staff into newly created roles: Andy Finch joins as senior product designer, Andy Rhodes as a senior consultant into 42T’s fast-growing wireless and electronic products group, and Tom Hellier as a graduate engineer.

“42 Technology has a strong track record in attracting truly talented engineers and consultants and our three new staff members are no exception.  The two Andys each have over 30 years’ industry experience and will significantly boost our in-house specialist skills in wireless comms, consumer electronics and user-centric design.  Tom Hellier is an exceptional new graduate with a string of design awards and other achievements to his name,” said Jeremy Carey, managing director of 42 Technology (42T).

Before taking up his latest role, Andy Finch was head of design at Tensator Group where he led the development of a broad range of technology-based products to take the company into new markets.  He has a BA in industrial design, is an expert in human factors and ergonomics, and when he was head of design and innovation at Morphy Richards helped to design several ranges of new domestic kitchen appliances.  Football takes up a large part of Andy’s life outside of work: he is an Aston Villa fan, an FA-qualified coach and runs a junior football team.

Andy Rhodes was previously VP product development at Zinwave, which specialises in developing reliable in-building wireless systems.  He has a track record of success in RF and wireless technologies, has held senior management positions both as a client and a consultant, and has worked extensively in Europe and North America.  He worked for over 10 years in Canada with EMS Technologies developing components and systems for use on communications satellites and launch vehicles. He has a BSc in electronics engineering and is a fellow of the IET.

Tom Hellier graduated from University of Cambridge in 2013 with a first class with merit BA in engineering and MEng and will be working towards chartership with IMechE through 42T’s professional development programme.  He was awarded the Henry Tomkinson scholarship in engineering by Girton College, Cambridge; won first and second year prizes for his practical design work; and at 16 built a two-seater sports car from scratch.  He also captained the men’s boat club at Girton College in what became the most successful year in the history of men’s rowing at the college.