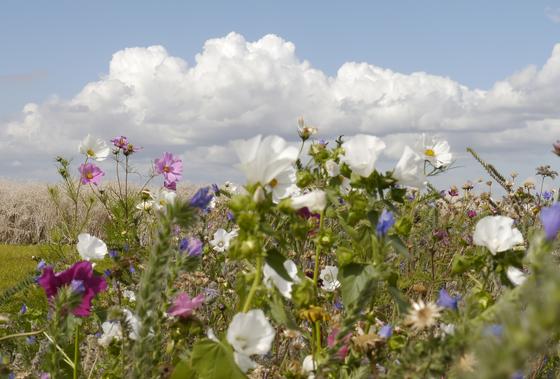 With the threat of bee shortages and crops that will go unpollinated, a new mix of flower seeds is poised to protect and strengthen bee colonies.

It’s feast or famine for [the bees]. So we created a food source that was available across the entire growing season. — Beverley Glover, Director of the Cambridge University Botanic Garden

A flower seed mix developed by a University of Cambridge academic is targeting the UK’s bee shortage by maximising the availability of nectar and pollen during the growing season.

About one third of what humans eat relies on insect pollination. While biofuel crops continue to expand, increasing the demand for pollination, honeybee populations have not kept pace. Wild pollinators, such as bumblebees, have helped to make up some of the shortfall, but bumblebee populations are also under stress, with their numbers dropping by about 30% in the UK between 1950 and 1980. Researchers have attributed that decline, in large part, to the loss of flowers and nests, habitat changes, agricultural chemicals, disease and possibly climate change, making it ever more important to protect wild bees.

The Throw to Grow Bee Mix, which was formulated by Professor Beverley Glover, Director of the Cambridge University Botanic Garden, with Stuart Donders of Moles Seeds, is aimed at protecting, growing and strengthening the bee population by providing pollinators with a steady diet of flowers that thrive throughout the spring, summer and early autumn in the UK. By providing a reliable food source for the bee population, the pollinators can produce more queens – thereby increasing the following year’s bee population. Bees are also less likely to succumb to disease if they are well nourished.

The seed mix was developed using a scientific methodology, taking into account flower reward, timing, accessibility, visibility and texture. It includes a selection of colourful flowers, like snapdragon, borage and dahlia, specifically to appeal to bees’ vision, which captures light at the ultra-violet end of the spectrum. The mix is designed to blossom in a way that offers pollinators a steady supply of nectar and pollen, from the first bloom of the yellow fields of oilseed rape, when food is abundant, to the first autumn frost, when typically there is not enough nectar to go around.

“If you’re a honeybee in East Anglia you’re having a great time while the oilseed rape is out,” said Glover, whose know how was licensed by Cambridge Enterprise, Cambridge University’s commercialisation arm. “Then within a few weeks those crops go to seed and there’s nothing to eat, so the bees rely on gardens and wildflowers. It’s feast or famine for them. So we created a food source that was available across the entire growing season.”

Without ample sources of nectar and pollen, bees become physically stressed, producing fewer queens and succumbing to mites and other diseases, which can require beekeepers to eradicate their stocks.

The flower seed mix was trialled over two years at the Cambridge University Botanic Garden, the National Institute of Agricultural Botany in Cambridge (NIAB), which spearheaded the development of the project, and at Moles Seeds in Colchester, which is the exclusive supplier.

“Bee mixes have existed in the past, put together in an ad-hoc way, but we decided to take a more scientific approach,” said Stuart Donders, Director of Moles Seeds.

The seeds are sold in packs, the smallest of which is 100 grams and are intended for use by large estates, local authorities and schools, where easements and fields need attractive, low-maintenance cover. Throw to Grow is usually sown from the end of April to the beginning of June, when the soil is warm and moist for the seeds to germinate.