Cuttsy+Cuttsy are excited to announce that they have been shortlisted as finalists at the 6th PM Society Digital Media Awards. 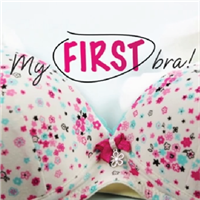 Recognising the best in creativity, innovation and effectiveness across the industry, the Digital Media Awards highlight the best programmes, tools and campaigns across a broad range of digital marketing activities within the healthcare arena.

Their film, ‘My First Bra' has been shortlisted for a Craft Award in Film and Animation and will be judged on the creativity, quality and technical skill of the piece.

Based on the idea that in every woman’s life a bra often signifies a milestone or a life-affirming event (a first bra, wedding bra, pregnancy bra), the film features a number of sequences using different bras to symbolise the importance of breasts to a woman.

Coupled with real-life accounts from breast cancer patients, it takes the audience on a rollercoaster of emotions - highlighting the most important BRA a woman may need.

Mathew Cutts, Director said “We’re delighted with the news and really proud of the team and the film.”

The winners will be announced on the 25th September at an awards ceremony in London…fingers crossed!

Cuttsy+Cuttsy is a healthcare communications agency where people matter. ...