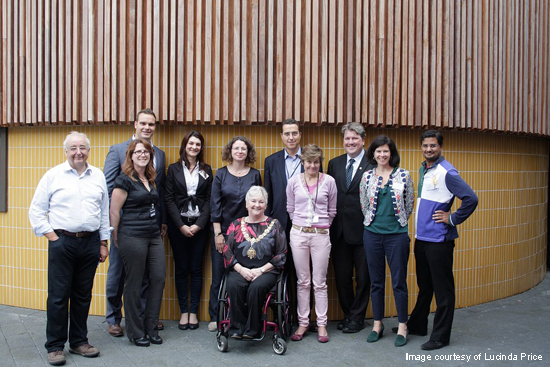 As one of the two title sponsors, Cambridge Ahead was proud to support a ground-breaking event last weekend which served as a pre-cursor to a larger event - ‘Be The Change Cambridge’ - to take place in early 2015.

This was a lively, informal event where groups of people of all walks of life in the city came together to talk about what they would like to change most about Cambridge. Not surprisingly the themes that came out chimed with Cambridge Ahead’s own agenda, examples being infrastructure (particularly transport and housing), entertainment through art and culture, the role of the three councils (the idea of a unitary authority found strong support), and ‘growing up in Cambridge’ (quality of life). The latter theme received a disproportionate level of engagement, little surprising since so many of those attending were were in their 20′s.

Alhough this was a small gathering of Cambridge citizens, it was heartening that the city’s politicians came to listen – Julian Huppert (MP for Cambridge), Vicky Ford (MEP for East of England), and Lewis Herbert (Leader of Cambridge City Council). Cue lots of notes scribbling by all three politicians as they listened to the viewpoints of the groups, and they too each talked about their own aspirations for Cambridge.

Also attending was Cllr Gerri Bird, Mayor of Cambridge, who as a pillar and the focal point of the community made a major contribution to the feeling of consensus. The event was expertly facilitated by David Cleevely CBE, Anne Bailey of Cambridge Area Partnership, and Antony Carpen, the inspiration for 'Be The Change Cambridge'.

The feeling at the end of the afternoon was that this had been a thoroughly worthwhile exercise whose informal discussions will inform the planning for the larger conference in early 2015. Read more about the afternoon’s events and see pictures and short videos on the Be The Change Cambridge website.