Cambridge Ahead Project leaders chart progress at One Year On event 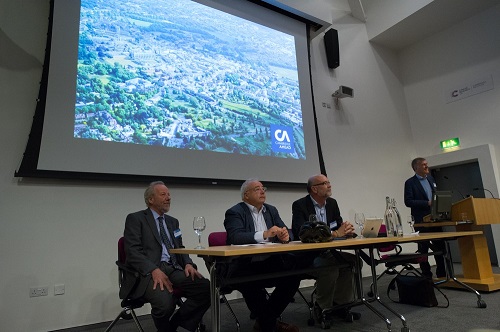 On Wednesday 1st October, over 100 people attended the Cambridge Ahead One Year On event at the Li Ka Shing Centre on the Cambridge Biomedical Campus. Attendees included the leaders of many of its 32 Member organisations and also various members of the business, academic, local government, non-profit and cultural community of Cambridge.

The main purpose of the event was for the three leaders of our projects to provide an update on their respective progress, of which the results of our Quality of Life survey undertaken in the Summer were most eagerly awaited. Our CEO, Jane Paterson-Todd, set the scene for the morning and introduced the panel of speakers.

First up was Dr Keith McNeil, CEO of Cambridge University Hospitals Trust (Member organisation), who was our host and had generously given us use of the lecture theatre in the Centre. Dr McNeil gave some interesting background on the functioning and work of the hospitals and campus, highlighted the many successes especially in cancer care, argued for sensible growth, and identified some of the challenges for CUH. These including funding, the need to renovate the main hospital building (which was built in the 1960s), and the fact that the main hospital is a victim of its own success and reputation, and struggles to serve the increasing number of patients in the East Anglian region.

The facilitator of the panel, Charles Cotton (Honorary Member and CEO,The Cambridge Phenomenon), then introduced the first speaker, Dr David Cleevely CBE (Honorary Member, entrepreneur and Chairman, Cambridge Wireless). As leader of the Promoting Cambridge Project team, he centred on how Cambridge needs a Promotional Agency in order to boost inward investment and improve the existing but unstructured arrangements and processes that exist at present. The start up phase of this agency will begin over the next couple of months, through Cambridge Network.

Dr Tony Raven, CEO of Cambridge Enterprise and leader of the Growth Agenda Project team, spoke next. He emphasised that data collection and analysis is still ongoing but that when complete we will be able to inform the debate and process of the Cambridge Growth Plan from 2019, working with the three Councils. Our approach is to better understand what our business community’s long term growth forecasts are and make comparisons with the national forecasts which are broken down by region. A further consideration outlined by Dr Raven will be how we tackle the ever increasing lack of commercial space.

Finally, Professor Mike Thorne, Vice Chancellor of Anglia Ruskin University (Member organisation) addressed the audience. As leader of the Quality of Life Project team, he presented the preliminary results of the Quality of Life survey, undertaken by RAND Europe (Member organisation). A summary of results is available in our press release but some key findings announced were in the area of transport, with 77% dissatisfied with the level of traffic in Cambridge and 48% of workers dissatisfied with bus services.

There followed a Press conference and further opportunities for guests to mingle. We would like to thank the Li Ka Shing Centre for hosting us and helping make the event a great success.

See a gallery of further images of the event here. Listen to Julian Glover’s report on the Press conference as broadcast on his Drive show on Cambridge 105FM here.