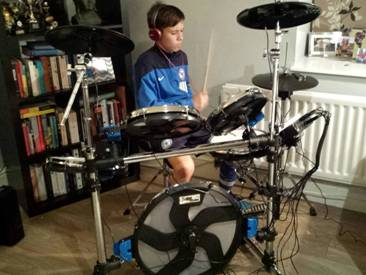 A profoundly deaf teenager who received a cochlear implant at CUH Addenbrooke’s is the winner of a special music grant, allowing his dream of learning to play the drums come true.

William Palmer, aged 13 from Peterborough, has been awarded the MED-EL UK under 19s Music Grant, an initiative introduced by MED-EL, a leading hearing implant manufacturer.

As the lucky Music Grant winner, he receives £500 towards the purchase of an electric drum kit, an allowance for sheet music and weekly music lessons for one year.

At the age of only three months it was discovered that William was profoundly deaf. As fate would have it, both his parents are carriers of a recessive gene, Connexin 26, one of the most common causes of congenital sensorineural hearing loss.

Andy, William’s dad, took the news in his stride. Having grown up in a family with deaf parents and relatives, he already knew sign language. William was given hearing aids, but he was simply too deaf to gain any benefit from them, so the family relied on signing.

It was when using sign language in a local café that a chance meeting with a little deaf girl and her mother took place: the girl had a cochlear implant and could hear and speak. This lead to William’s parents deciding to learn more about cochlear implants and contacting Addenbrooke’s Hospital.

A cochlear implant is a surgically implanted electronic device that provides a sense of hearing to a person with profound or severe hearing loss. It is used together with an audio processor positioned behind the ear or on the head.

After tests and assessments, William received his first cochlear implant at the age of two and was introduced to a world of sound and a love of music. He received an implant in his other ear the following year.

William’s hearing journey had begun and he learnt to listen and speak. He attends a mainstream school where he started learning to play the drum.

William is delighted with his new electronic drum kit, which is no surprise to his dad.  Andy said: “William loves playing the drums and is committed to it. He has loved the drums since he was very small. Indeed, it was probably the first sound he ever heard.”

Thanks to his cochlear implant, William is able to enjoy music - one of his favourite songs is the Monkees’ hit ‘Day Dream Believer’. His own daydream is to play drums in a band and to perform on stage in front of an audience, just like his drum teacher Chris.

William is also a budding actor and he is currently taking part in his first film, ‘Dreaming of Peggy Lee’. There seem to be no end to his talents and zest for life: he also plays for several football teams including Hampton Football club where he has scored more than 50 goals.

David Baguley, head of audiology and hearing implants at Addenbrooke’s, said:  “It is fantastic news that William has been awarded this grant to allow him to pursue his passion for music. William has made amazing progress with his hearing using his implant device.

“Here at the Emmeline Centre for Hearing Implants , part of CUH, we provide  a service to surgically implant hearing technology in adults and children for whom hearing aids do not provide sufficient benefit.  As a regional referral centre we have helped over 500 children like William in the last 15 years  to be able to function well in the world of sound.”

Cassandra Brown, Managing Director of MED-EL UK said: “We have been overwhelmed by the number and quality of applications for the music grants again this year. Helping people of all ages to improve their music appreciation, both with familiar and unfamiliar musical pieces is as important to us as it is to our implant users. We wish William every success with his lessons.”

The MED-EL Music Grant was introduced in 2013 and has two categories: one for under 19s and one for 19s and over. The winner of the over 19s category is a mature student from Shipley, Yorkshire, who is learning to play the guitar.

For further information about MED-EL, and the music grant visit www.medel.com/uk/musicgrant