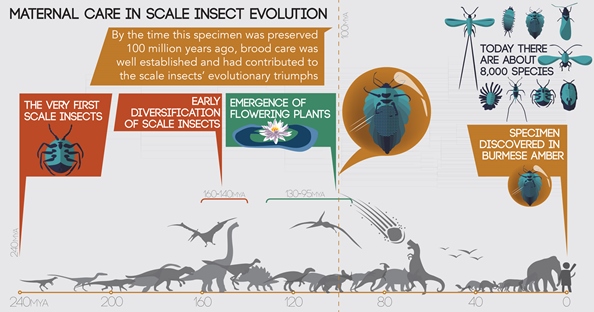 Scientists have uncovered the earliest fossilised evidence of an insect caring for its young.

The findings push back the earliest direct evidence of insect brood care by more than 50 million years, to at least 100 million years ago when dinosaurs dominated the earth.
The new fossil is the only record of an adult female insect from the Mesozoic, an era that spanned roughly 180 million years. The Mesozoic era was the age of the reptiles and saw both the rise and fall of the dinosaurs, as well as the breakup of the supercontinent Pangaea.
The female ensign scale insect is preserved in a piece of amber retrieved from a mine in northern Myanmar (Burma). The specimen was trapped while carrying around 60 eggs and her first freshly hatched nymphs. The eggs and nymphs are encased in a wax-coated egg sac on the abdomen. This primitive form of brood care protects young nymphs from wet and dry conditions and from natural enemies until they have acquired their own thin covering of wax.
The behaviour has been so successful for promoting the survival of offspring that it is still common in insects today. Young nymphs hatch inside the egg sac and remain there for a few days before emerging into the outside world.
The findings may even offer an explanation for the early diversification of scale insects. The emergence of flowering plants and ants are thought to have been crucial for the rapid evolution of many new insect species, but they were not yet present during the evolutionary history of the ensign scale insects.
“Brood care could have been an important driver for the early radiation of scale insects, which occurred during the end of the Jurassic or earliest Cretaceous period during the Mesozoic era,” says lead author Bo Wang, an associate professor at the Chinese Academy of Sciences.
Fossilised evidence of animals caring for their young is extremely rare, especially in insects. Wingless females were largely immobile, so were less likely to be accidentally buried. A cockroach from a similar period was reported carrying a mass of eggs, but cockroaches often deposit their eggs rather than brooding them. The only other direct evidence of brood care is from Cenozoic ambers, the era that extends to the present and began about 65 million years ago with the extinction of the dinosaurs.
“Although analysis seemed to suggest that ancient insects evolved brood care, this is the first direct, unequivocal evidence for the fossil record,” says Wang.
The team have named this new species Wathondara kotejai after the goddess of earth in Buddhist mythology and the late Polish entomologist Jan Koteja.
Professor Wang led the international team of scientists from the Chinese Academy of Sciences, the University of Bonn (Germany), the Natural History Museum (London), the University of Silesia, and the University of Gdansk (Poland).