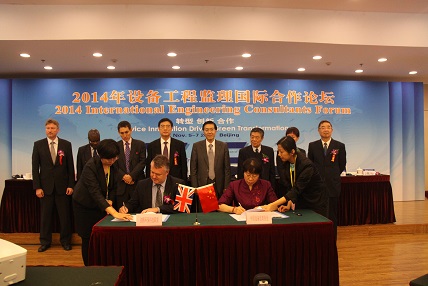 Cambridge Cleantech has established a new Smart Cities Special Interest Group to tap into the local knowledge in sectors such as building technologies, smart metering and low carbon vehicles, and sell solutions to developers and local authorities at home and abroad.

At the recent launch event of the Smart Cities group at PwC in Cambridge, it was ‘standing room only’ as the attendees  listened to specialists including; Alan Kell OBE, Managing Director, Intelligent and Green Systems (and Chairman of the new group); Eric L’Helguen, CEO, Embix and  Gary Atkinson, Director - Emerging Technologies, ARM.

A first action of the group was to visit China and sign a Memorandum of Understanding (MoU) with the China Association of Plant Engineering Consultants (CAPEC). CAPEC’s members are responsible for delivering major infrastructure projects across the country.

Pictured above is Martin Garratt, CEO of Cambridge Cleantech, signing the MoU with Jiang Hua Secretary-General of CAPEC.

Alan Kell, the Chairman of the new Smart Cities group, will be attending the Smart Cities Expo in Barcelona and will speak on the developments in smart cities thinking in Cambridge, not least through the products and services of the members of Cambridge Cleantech.  Other smart cities events are then planned in Cambridge for 2015.

Zhang Ruijie, Assistant Secretary General of the China Association of Plant Engineering Consultants (CAPEC), comments “Smart city is a new concept and new mode in promotion of smart urban planning, construction, management and service based on new generation of IT technology. It is of great importance for improving sustainable development capabilities of cities and speeding up the merging process of industrialization, IT technology, urbanization and agricultural modernization. In the past years, smart city construction in China has witnessed remarkable progress. Both the central and local Chinese governments have disseminated guidance, policies and measures to support smart city development and construction. Hundreds of Chinese cities are in the process of going smart. CAPEC, as the national association of plant engineering consulting industry, has been leading its member companies to participate in this smart wave. We sincerely hope that we can closely cooperate with British companies, especially Cambridge Cleantech members to jointly facilitate this undertaking.”

Victoria Ball, Sustainability Manager, David Ball Group, comments, “Cities in the 21st century now have to be 'smart' to meet the increasing pressures on society and the environment. Individuals, government and private enterprises must all take a holistic approach to improving the cities they live and work in, both for the current generation and generations to come. Improvements need to be made across the board, right from the laying of the foundations of every building, which is why the David Ball Group has invented Cemfree, a structural concrete which replaces 100% of the Portland Cement content of regular concrete, thus reducing the embedded CO2 by 95%. Technologies such as Cemfree are here now, so we must all demand their use for the continued improvement of our urban lives."

Martin Garratt, CEO of Cambridge Cleantech, comments that “the new Special Interest Group for Smart Cities builds on the strengths of our members in those sectors within which Cambridge has a potential world leading role, including smart metering, building technologies and low carbon vehicles. I am particularly pleased to have signed a MoU with the prestigious CAPEC group, whose members are responsible for so much of the infrastructure development across the vast Chinese market”. He went on to say  “The UK Government has also acknowledged the importance of this sector by establishing a Future Cities Catapult centre to provide business support and having witnessed such a strong appetite from Cambridge Cleantech members for our new group, then clearly this is going to be a key sector of the future”.

Alan Kell, the Chairman of the Smart Cities group comments “The "smart city" concept has been around for a number of years, but only recently - with the explosive growth in smart phones and digital networks and sensors- has this idea come close to realization. To fulfil its true potential, however, smart city  implementation needs to be based on sound business models and has to combine effectively with established low-carbon interventions which are designed to meet the challenges of climate change With its extensive membership of world-class companies, Cambridge Cleantech is uniquely positioned to provide industry leadership in the delivery of effective smart city implementations at the regional, national and international levels through  its newly established Smart Cities Group.”

Cambridge Cleantech is the members’ organisation supporting the growth of environmental goods and services or “cleantech” companies in Greater Cambridge and beyond.