Antarctica - have you got what it takes? 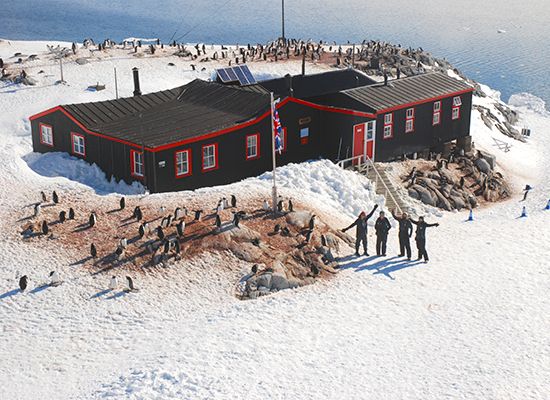 The United Kingdom Antarctic Heritage Trust (UKAHT) exists to advance the preservation, enhancement and promotion of Antarctic heritage and to engage, inform and inspire a global audience.  The UKAHT is a UK based charity dedicated to promoting Antarctic heritage and this is achieved through the care and conservation of historic buildings and artefacts and delivering and supporting a range of innovative programmes.

Each year the UKAHT’s UK team – based in Cambridge – search for committed individuals to make up a small team of four to spend five months at its flagship site, Port Lockroy, situated on Goudier Island in the Antarctic Peninsula.

Following a conservation survey in 1994 British Base ‘A’ – Port Lockroy was recognised for its historical importance and designated as Historic Site and Monument 61 under the Antarctic Treaty.  The buildings were renovated in 1996 by a team from the British Antarctic Survey (BAS) and have since been open to visitors during the Antarctic summer. UKAHT took over the running of Port Lockroy in 2006.

Not only an important natural and historic environment, Port Lockroy is also a destination for many around the world who wish to learn more about the Antarctic. During the summer months (November to March) approximately 18,000 people visit the site – the equivalent of one to two ships per day.  Part of the UKAHT’s role is to monitor the impact of these visitors on the wildlife, record the number of visitors and ships visiting the area, and, in accordance with the Antarctic Treaty, follow strict guidelines to ensure the environment is properly cared for.  The UKAHT also runs the post-office at Port Lockroy on behalf of the Government of the British Antarctic Territory, which in turn donates a proportion of the Post Office revenue to the Trust.  Around 70,000 cards are posted each year for delivery in over 100 countries – mail usually takes up to six weeks to arrive – unsurprisingly there is no express service available!

The team chosen to spend the 2015/16 season at Port Lockroy will assist the Base Leader in the efficient running of the post office, maintenance and museum operation, with areas of responsibility being divided up amongst team members.  A can-do attitude is vital as is good physical fitness, co-ordination (carrying heavy boxes over slippery rocks and slushy snow whilst dodging the local gentoo penguin population is a frequent requirement), environmental awareness and a practical knowledge of minimum impact living.  Above all successful candidates need to be passionate about the Antarctic.

Stephen Skinner and Amy Kincaid are members of the current Port Lockroy team.  Stephen, an outdoor instructor who has training in mountain rescue and outdoor leadership is clear about the value of the experience from his point of view, whilst being realistic about the day to day routine:

“The juxtaposition between this beautiful environment and the harsh conditions which formed it is truly awe inspiring.  However, due to these conditions life here can be challenging and it’s important to be very flexible in your attitude towards tasks.  We work long days, which are both mentally and physically demanding – it requires a certain strength of character!  That said, I feel honoured to have had the opportunity to be here, I have learnt new skills, made new friends and have lots of stories to tell.”

Amy, who has experienced teaching in Ecuador and spent time working as an outdoor instructor on a remote island off the west coast of Scotland prior to joining the Port Lockroy team is equally enthusiastic about her experience despite the sometimes harsh conditions:

“I don’t want to put anyone off applying for the role, but you need to be realistic. You will meet incredible people and live in a stunning place where the weather is actually pretty good, the Nissan hut surprisingly cosy and the wildlife wonderful.  But, it’s hard work, can be very tiring and being confined to an island the size of a football pitch isn’t for everyone.  It’s a question of weighing it up…from my perspective though I’m very glad to have been given the opportunity and it has been utterly worth it.”

For those of us for whom a five month trip to the Antarctic isn’t a possibility the UKAHT provide other ways of getting involved.  Becoming a ‘Friend of Antarctica’ ensures members are kept up to date with the UKAHT’s activities via twice yearly newsletters and invitations to selected events.  To find out more about the UKAHT, become a ‘Friend’ or access further details about the unique opportunity to experience life in Antarctica first hand, please visit the UKAHT website.