Schoolboy Alex Manders, 16, has made his first solo flight in a Cessna 172 of the Cambridge Aero Club from Cambridge Airport! Still not old enough to drive a car, Alex, who lives at Sawston, took his first major step into a future career in aviation by flying solo at the earliest age the Civil Aviation Authority will allow. 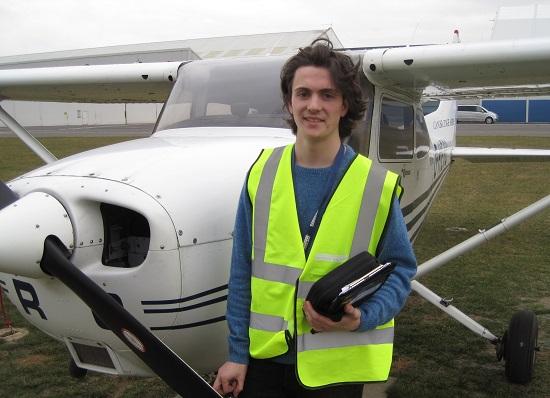 This flight followed 19 hours of intensive dual instruction training, ground studies which led to a pass in an exam in Air Law, and the completion of a CAA medical which enabled Alex to take to the skies alone.

Alex had his first taste of flying through a trial lesson with Anthony Cook Head of Training at The Cambridge Aero Club, three years ago at the age of 13. Alex was also enthused into aviation by his grandfather, Charles Bailey who flew in the RAF during WW2, as a flight engineer on the Vickers Wellington, a British twin-engine, long range medium bomber. Alex has also regularly been a visitor to Duxford, and completed work experience in 2013 at RAF Coningsby in Lincolnshire, with the Battle of Britain Memorial flight where he had the opportunity to look very closely at the last RAF Lancaster.

Anthony Cooke said: Alex is a delightful and very enthusiastic young man who is a natural  and talented pilot. We look forward to helping him to achieve his ambitions in aviation. Sixteen is the minimum age for flying solo in this country, but it is very rare for anyone to achieve this at this age.

Alex now hopes to continue his flying training so that he can either fly as an Airline Pilot, or to follow his Grandfather into the RAF.

In the above photograph Alex is pictured beside his Cessna 172 aeroplane following his solo flight.

Age is no barrier for learning to fly and it is possible to fly solo in an aeroplane at age 16, and Alex is the youngest member of the Cambridge Aero Club to fly solo in recent years. At the opposite end a number of older people are also learning to fly and last year a man, aged 100, received his first flight in an aeroplane of the Cambridge Aero Club.